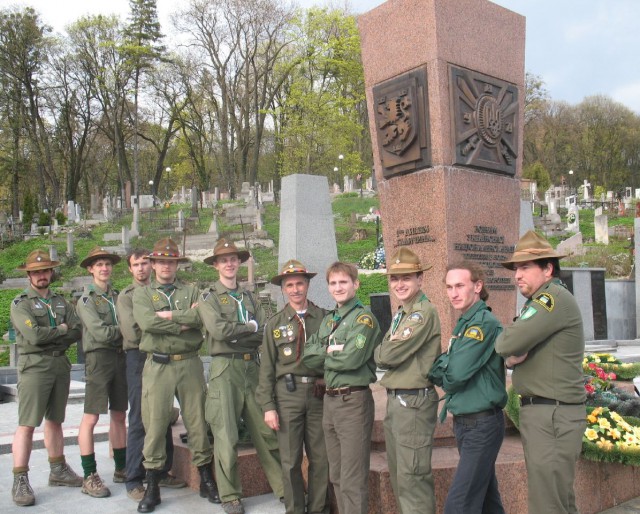 Every year, rallies commemorating the Second World War are held all over Ukraine. The celebrations divide the people however and feelings run high, despite the passage of time. To understand why, it’s necessary to know a little about the history of the country.

In 1922, Ukraine became a Soviet Socialist Republic. Ten years later, in the period 1932/1933 a famine occurred which resulted in the deaths of between 2.5 and 7.5 million Ukrainians. Called the ‘Holodomor,’ the famine is widely believed to have been deliberately engineered by the Stalinist regime.  At the time, Stalin denied that there was any famine in Ukraine, and the Soviet Union continued to export millions of tons of grain, more than enough to have saved the lives of all the famine victims.

On 24 August 1991, Ukraine announced that it was an independent state, and the government declared that the country would no longer follow the laws of the USSR. Later that year a national referendum resulted in a 90% vote in favour of independence from the Soviet Union. Ukraine became a sovereign State, but the old political loyalties live on; there is a political split between the “pro-Russian” Eastern Ukraine, and the “pro-European” Western Ukraine.

There are frequent street fights at the annual Second World War rallies, an indication that old divisions remain strong, 70 years after the events they commemorate.

In the pro-Russian east, where Russian is the main language the rallies celebrate the Red Army’s triumph over the invading Nazis. Some 4.5 million Ukrainians joined the Russian troops to overthrow the German invaders, believing it was better to remain under Russian rule than submit to another tyranny.

In the Ukrainian-speaking west of the country, people have erected monuments to the Ukraine nationalists who fought against Soviet troops – often cooperating with the Nazi forces in the process. The nationalists believed in the Nazi promises of some degree of autonomy for Ukraine when Germany emerged victorious. The modern-day celebrations often include an enactment of a crucial battle, fought by the SS Galician division against the Russian troops. People dress in Nazi uniforms and perform mock burials in honour of the Ukrainian ‘heroes’ who died fighting for their national identity, the Yahoo News reports.

Since becoming Independent, Ukraine has endured several political upheavals, culminating in the   2014 Crimean crisis, during which Russian troops invaded the Crimea region. Crimea was unilaterally annexed by Russia on 18 March 2014.

It seems that Ukraine’s troubled history is not over yet.