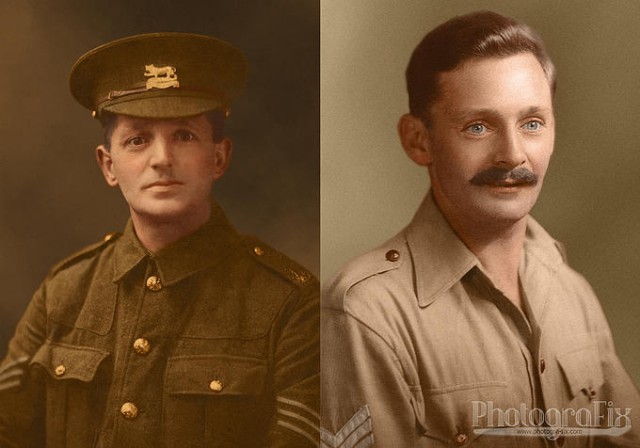 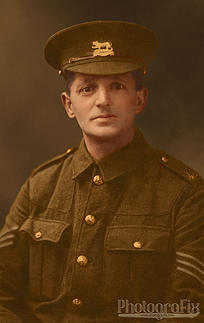 The Leicestershire Regiment were famously known as the “Tigers”, after their service in India during the early 19th century. From 1925 the regiment was granted the badge of a royal tiger, which can be seen on AJ Langran’s cap in his portrait. The nickname of the regiment is also believed to be the origin of the name of the Leicester Tigers rugby union club.

Perhaps a sign of his future military service, Arthur was born in 1881 at the Curragh Camp, the training centre for the Irish Army. At the outbreak of the First World War and a month after getting married, he enlisted with the Lincolnshire Regiment in November 1914 aged 33. Arthur eventually transferred to the Leicestershire Regiment and, as the photo shows, he gained the rank of Sergeant.

AJ Langran was discharged from the regiment in August 1918 due to sickness which meant that he was no longer fit for war service. His son Peter was born the following August but only knew his father for 8 years as Arthur died at the relatively young age of 47. 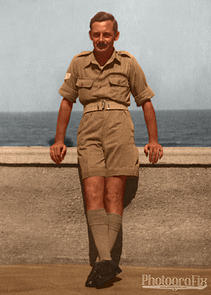 Peter Francis Langran enlisted into the army in January 1940 at the age of 21, leaving his job as a leather warehouseman in Leicester. Like his father, he served with the Tigers as a private and in March of that year qualified as a driver at Leeds Training Centre. Peter was with the regiment for only a year, going on to join the Royal Army Ordinance Corps where he was promoted to Lance Corporal.

The ROAC was responsible for the supply and repair of weapons, armoured vehicles and other military equipment to all regiments of the British Army.

Whilst with the ROAC, Peter was promoted to Asst Sergeant, and in 1942 he joined the newly formed Royal Electrical and Mechanical Engineers (REME) where in 1943 he was promoted to Sergeant, the same rank as his father 30 years earlier. 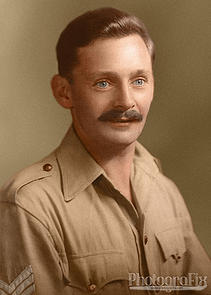 It was with REME that Peter was posted to Palestine in August 1943, which is where the portrait of him was taken. He remained in Palestine until after the war, and whilst there he met his future wife Lea, who had travelled to Palestine from the Czech Republic in 1939 to escape the impending Nazi invasion.
Lea worked as Peter’s secretary at the barracks in Palestine and when he was posted to Egypt, Lea moved with him and the couple got married in Tel a Kabir, Egypt in July 1946. They are the couple in the centre of this wedding photo.

After the war, Peter and Lea moved back to Leicester where they lived together for many years. 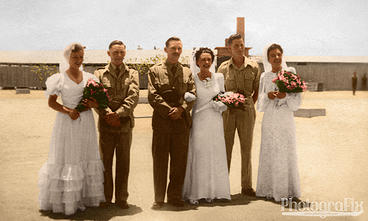 All images colourised by Tom Marshall at PhotograFix, with special thanks to Richard Langran, the grandson of AJ Langran, and son of Peter, who gave me permisson to share their stories.

See more of Tom’s Work on his Facebook Page