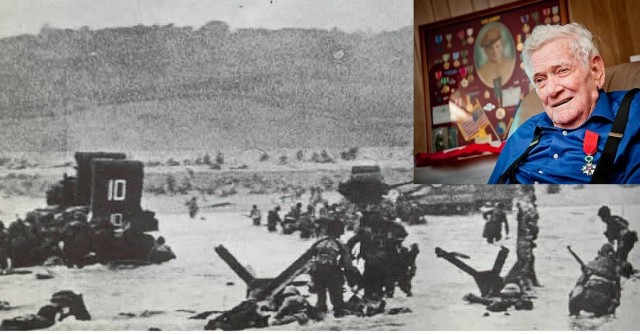 The Légion d’honneur was originated by Napoléon Bonaparte. It is France’s highest honour.

On the 70th anniversary of D-Day in June 2014, the French President announced that the award would be presented to all foreign veterans who fought for French freedom during the Second World War. To qualify, veterans must have been in combat in France between 1944 and 1945. Veterans must apply for the award, and nearly all cases are approved.

Arlie Ray Horn, aged 90 from Beaumont Texas received his award from the Consulate General of France at Fort Sam Houston in San Antonio. Born in 1925, Arlie was raised in Magnolia Springs, Jasper County, Texas. He had a fairly uneventful life until, at six o’clock on the morning of June 6th, 1944 he found himself wading ashore from a US landing craft on the coast of Normandy, In France.

Arlie was just nineteen years old and was a sergeant in the 116th Regiment of the U.S. Army’s 29th Infantry Division which landed on Omaha beach that day – known as D-Day ever since. The landings were the beginning of Operation Overlord, the Allied invasion of France that signalled the beginning of a long and bloody campaign to free Europe from Nazi occupation. Enemy opposition was fierce on the five beaches, codenamed Utah, Omaha, Gold, Juno and Sword, selected as sites for the seaborne landings. Of these, Omaha was the largest and most fiercely contested.

Despite suffering over four thousand casualties, the Omaha beach invasion force landed more than 34,000 troops by the end of the day, and men had fought their way up the beach to establish a foothold in France.

Arlie Ray Horn was one of those men, and he was accompanied throughout by his comrade, Jack King. The two men were inseparable, and when they discovered the bodies of two Americans who had been shot by the Nazis, they vowed to see the fight through, no matter what. The two men remained close friends throughout the war, and afterwards.

Jack is now aged 91 and suffers from Alzheimer’s disease. When Arlie Ray discovered that he had not received the Legion d’honneur, he set about putting matters to rights.

Horn’s son initiated enquiries, and early in January 2016, Arlie Ray proudly pinned the medal on Jack’s chest at a ceremony in Beckville. Seventy years after the events that forged a friendship, both men have received the recognition of a grateful nation.