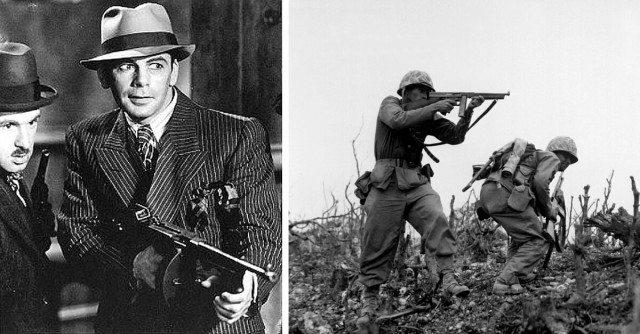 Everyone has seen the Thompson submachine gun being used in those black and white gangster movies of the 1930s, and, of course, the famous bootlegger ‘Machine Gun Kelly’ used the weapon exclusively. What many people don’t know, however, is that the legendary Tommy gun (as it was popularly known) was the brainchild of an American General.

General John Taliaferro  Thompson first thought about a lightweight, handheld machine gun in 1915, when he was looking for a weapon that could be used with effect in the confined space of a First World War trench.

At that time, American soldiers were routinely issued with bolt-action rifles with bayonets, and although the rifles were effective at longer ranges they were not of much use for trench fighting, where space was limited, and every round had to be manually loaded.

Thompson wanted what he referred to as a ‘Trench broom’, a compact automatic weapon that was easy to carry, and could fire many rounds in a short time.

He started a new company – The auto ordinance corporation – in 1916, and the first box-fed prototype weapon – named the annihilator – appeared in 1918, at the end of the war, and too late to find a market with the US military.

The first production model – renamed the M1921 was manufactured by Colt in 1921. This weapon was capable of a firing rate of 800 rounds of .45 calibre ammunition per minute, and 15,000 were made. The gun was an impressive performer, but sales were poor, even when an improved version – the M1928 – considered by many to be the best version ever made, was developed. One problem was the high cost, an M1928 sold for $200 ($2300 at current values).

The cost was no deterrent as far as criminals were concerned, however, and the Thompson sub-machine gun quickly found favour with people like John Dillinger, and, of course, George (machine gun) Kelly. The British government briefly considered the gun in the late 1920s but decided against it because of its unsavoury ‘gangster’ image.

That attitude changed abruptly in 1939, with the outbreak of the Second World War and a weapon-hungry British government bought M1928s by the thousand. The Thompson sub-machine gun came of age, and a cheaper variant, the M1A1 model became a firm favourite with both British and American forces throughout the war.

The Army introduced the U.S. M3 and M3A1 submachine guns in 1943 with plans to produce the latter in numbers sufficient to cancel future orders for the Thompson, while gradually withdrawing it from first-line service.

However, due to unforeseen production delays and requests for modifications, the M3/M3A1 never replaced the Thompson, and purchases continued until February 1944. At the end of World War II, the Thompson, with a total wartime production of over 1.5 million, outnumbered the M3/M3A1 submachine guns in service by nearly three to one.

During the Vietnam War, some South Vietnamese army units and defense militia were armed with Thompson submachine guns, and a few of these weapons were used by reconnaissance units, advisors, and other American troops.

It was later replaced by the M16 assault rifle. Not only did some U.S. soldiers have use of them in Vietnam, but they encountered them as well. The Viet Cong liked the weapon, and used both captured models as well as manufacturing their own copies in small jungle workshops. (Wikipedia)

No longer in service, they are nowadays much sought after by collectors. A clean example in full working condition will sell for as much as $25,000.