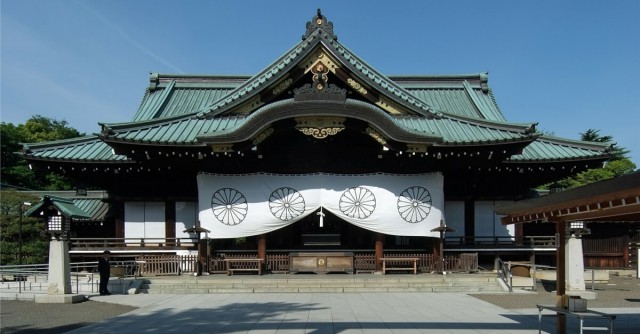 A Shokonsha, a type of Shinto Shrine, was established in 1869 by Emperor Meiji at Kudan in Tokyo.  On the 27th January 1879, it was visited by Emperor Meiji who wrote, “I assure those of you who fought and died for your country that your names will live forever at this shrine in Musashino”. The shrine was given the name Yasukuni, which means to represent wishes for preserving the peace of the nation.

A Shinto Shrine is a shrine designed specifically for the storage of sacred objects and is not a place of worship, and a Shokonsha is a sanctuary that is built to enshrine the war dead, particularly those who died in the service of the Imperial nation.  In the Shinto religion, the soul of a departed loved one becomes ‘kami’ or a revered spirit, so this shrine containing around 2.4 million souls is a very holy place and revered by millions of Japanese people who lost loved ones during the many wars that have been fought since 1869.

The souls of millions of people, both male and female, mostly military personnel but also anyone, who served in places such as the merchant navy or worked in munitions factories and died in allied bombings, are remembered here. It does not include the general population that died in the course of the war.

The Yasukuni Shrine was built with the “purpose of enshrining those who have died in war for their country and sacrificed their lives to help build the foundation for a peaceful Japan.”  In the shrine are records that denote the name, place and date of birth, and place and date of death for each person so enshrined.

Relatives often undertake rituals offering food and dedicating words of appreciation for the dead and each year, in spring and autumn, major ceremonies are held, under the auspices of the royal family, and offerings from His Majesty the Emperor are dedicated to the dead.

Up to 1978, this shrine was a place of peace and for the Japanese people to revere their loved ones, but in 1978 the government, in a secret ceremony, inducted approximately 1 000 war criminals from World War II, after a special eligibility category for ‘victims’ of international war crimes tribunals was created.  These people were convicted and executed at the end of the war by the Allied war tribunals and many committed heinous crimes.

Crimes such as the “Rape of Nanking”, where two Japanese officers had a competition to see who could kill the most Chinese with their swords, were truly horrendous.  Prisoners of war were used as bayonet practise to blood new recruits before they were sent to the front while many prisoners were used for scientific experiments and many Chinese girls were used as sex-slaves to entertain Japanese troops.

Needless to say, when this induction came to light, it caused a great deal of controversies and many of Japan’s neighbours, whose citizens had suffered at the hands of these criminals, were not impressed with their induction into the shrine.

Also, the museum at the shrine that is dedicated to Japan’s war history presents a very nationalistic or one-sided view of the war.  The Chinese and other nations believe that Japan has never apologised for the atrocities committed during the war and made no attempt to educate younger generations about these crimes.

In addition to the anger over the sanitised version of the history, are the names of thousands of Koreans and Taiwanese soldiers, subjects of the empire and conscripted by the Japanese, also included at the shrine.  Their families have requested that they be removed but the Shinto priests say that under the Shinto religion this is not possible.

When the shrine is visited by a high-ranking government official such as the Prime Minister, it causes an outcry all over the world.  No-one remembers the loyal Japanese soldiers that fought for their country; all that is remembered are the war criminals and the museum.  These controversies taint the memories of the faithful soldiers and it is still uncertain why the government allowed the war criminals to be included.

One explanation could be that many Japanese believe that the war tribunals were a form of victor’s justice, as they allowed hearsay evidence, called the “Best Evidence Rule”, to be put forward.  This would not be acceptable today but no-one can claim that no crimes against humanity happened, and those criminals should be held to account.

In November 2015, a pipe bomb exploded in a public toilet on the grounds of the shrine and though no one was injured the Shrine was closed for some time while authorities searched for any more explosive devices.  This is just one more example of the conflict that arises around this shrine.

The name of the shrine means to preserve the peace of the nation but that seems unlikely to happen in the near future, and it is very sad that a place that should revere the memory of millions of good, loyal men should be tainted by conflict.