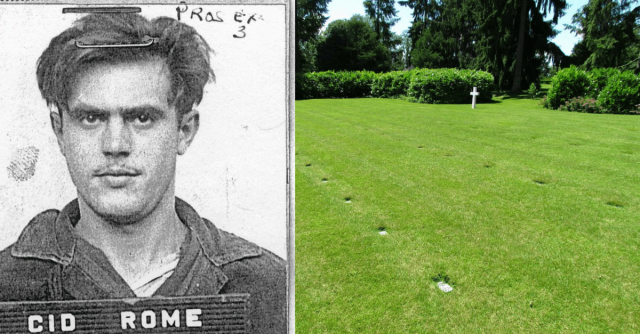 The story of a World War Two US Army deserter who caused criminal chaos in Rome during the war has been uncovered.

Werner Schmiedel was from Breinigsville in Pennsylvania and a Private in the US Army. When on tour in Italy he deserted the army and gathered together a gang of US and Canadian deserters and started a criminal gang.

The group of deserters lived in Rome’s criminal underworld robbing both civilians and soldiers alike. Crimes included holding up a Polish General’s car and shooting a local man in a liquor store.

Full of confidence and bravado Werner called himself public enemy number one and the media fostered this view with stories of his crimes and even prostitute ring.

In the US Army he was known as Robert Lane, as which Werner had enlisted. His Rome criminal gang became known as the Lane Gang.

After he killed the local man in the liquor store he was finally captured by military police and was convicted of robbery and murder and was sentenced to hanging in 1945. Before his sentence could be carried out, Werner escaped from prison in a huge Christmas Eve bust from the Italian jail. He was eventually recaptured and returned to prison to await his sentence.

Army historians say that Werner was a shifty guy who was always seeking to get one over the Army. Werner’s father wrote to President Roosevelt to plead for his son’s freedom and return to the US, but he had no luck.

Once the war had ended, Werner was hanged in June 1945 at the age of 22 near Naples in Italy.

Even though Werner had served a total of five years in the US Army he had never come face to face with the enemy. He avoided combat at all costs and took long periods of sick leave and disappearance, The Morning Call reports.

Werner’s hanging did not raise much interest back in his home town at the time, since everyone was celebrating the victory over the Nazis. The local Evening Chronicle paper did run a story about Werner being sentenced to death for the murder of the local Italian man, and again a small story when he was eventually hanged.

Werner was one of 96 US soldiers executed by the US Army during World War Two.