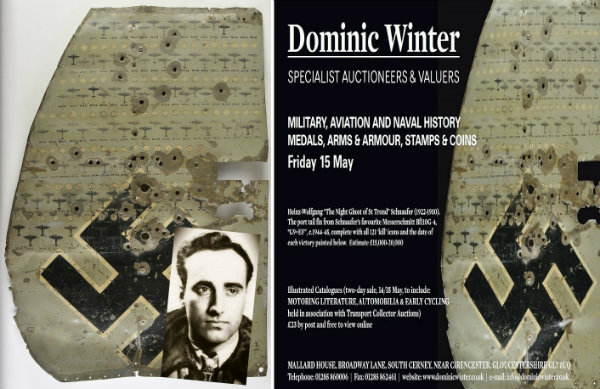 There was an uproar and commotion in all sections of British Army and RAF after the news of a German POW started surfacing. Although there were hundreds of thousands of German POW’s up and down the European continent, but this particular Luftwaffe Pilot had earned a reputation during the war. ‘The Spook of St. Trond’ as he was famous as Heinz-Wolfgang Schnaufer is the most deadliest fighter pilot ever to have lived in the modern history.

Very Recently the tail fin of the very plane that he used to destroy 121 Allied bombers and fighters (mostly British and Commonwealth), has sold for a staggering £90,000, more then five times the original expected price. The auction took place at Dominic Winter Auctioneer Ltd in Gloucestershire.

Schnaufer was not an ordinary fighter pilot, and his plane was certainly not an ordinary plane. Schnaufer had engraved the tail of his plain with the information of all 121 planes that he destroyed during his service as a night pilot.

After the war Shnaufer’s plane was not taken care of and its parts got scattered throughout the country. A Luftwaffe historian and military enthusiast Wolfgang Lohmann discovered the iconic fin in 1960’s in a small village called Hillegossen in Germany. The owner of a house in the village was using the artifact to patch up his roof.  Lohmann bought the tail from the owner and put it in a war display in Germany ever since.

Heinz-Wolfgang Schnaufer was the most feared Luftwaffe fighter pilot of the Second World War. Almost every British fighter pilot knew about his legacy and destructive accuracy in the air, and wished not to come face to face with him. From 1, June 1942 to 7 March 1945, Schnaufer went on 164 operations, destroying 121 Allied bombers and fighter planes killing more then 500 pilots and crew members. Schnaufer marked every kill with an icon and date of the kill printed on the tail of his favorite plane.

Known as ‘The Spook of St. Trond’, after the name of his base in Belgium, Schnaufer was one of the only 27 soldiers awarded with the Knights Cross with Oak Leaves, Swords and Diamonds. After the end of the war, every member of Schnaufer’s night fighter team was awarded the Knights Cross of the Iron Cross, in honor of their services to defend Germany against Allied air raids, the Mail Online reports.

Schnaufer was captured by the British forces after the war in May 1945 and held as a war prisoner for a while. After his release from British custody a year later, Schnaufer returned to Germany and took care of his family wine business. Schnaufer died in 1950 following a fatal car crash.