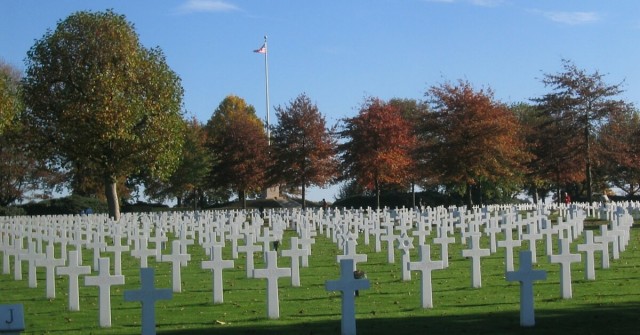 In 1945 the people of The Netherlands started a program named “Adopt-A-Grave” to show their appreciation to the U.S. soldiers who sacrificed their lives for, that country’s liberation from German occupation and for Europe’s freedom. One U.S. family talks of their gratitude to Martin Hermans, a Dutch man, who tended the grave of their loved one for several decades and who recently passed away, aged 89.

The grave of U.S. Army Pfc. Richard J Schmitt, a Purple Heart recipient, is in The Netherlands American Cemetery and Memorial in the village of Margraten. This site is home to the only American military cemetery in The Netherlands. Most of the 8,301 soldiers buried there died during Operation Market Garden in 1944. Many of those who are buried here are paratroopers who died during a daring effort to end the war in Europe, early, by seizing key Dutch bridges.

Hermans, used to travel over 50 miles to the cemetery to look after the gravesite of the soldier that he never knew.

Raymond Schmitt and his wife Linda are overwhelmed by Martin’s selfless commitment and believe that the Dutch deserve recognition for their dedication over the years to the American soldiers’ graves. Linda said, “I was more taken back that people so far from the United States would do this.”

Raymond was young when his brother died and can still remember the day the telegram arrived for his mother with the news of Richard’s death. He had served with the 406th Infantry Regiment, 102nd Infantry Division, until his death on November 19, 1944.

Linda and Raymond have a photo of Martin sitting in his wheelchair next to the grave. They have kept all the communications that they received from him over the years, including an email from Martin’s grandsons, Dirk and Bram Trienekens. As part of the “Adopt- A-Grave” program the tradition passes on to them and they will take over the tending of the grave and will continue to lay flags and flowers there just as their grandfather did for all those years.

Dirk wrote in the email, “Martin never did his work for public acknowledgement. I know your appreciation meant a lot to him.”

Linda Schmitt said, “We feel honored to have found out the whole story of the wonderful, caring people of Margraten and the ‘Adopt-A-Grave’ in that country, where it’s an honorary tradition they pass them down in their families.”

There is currently a waiting list of  Dutch people who wish to adopt a grave at the cemetery.