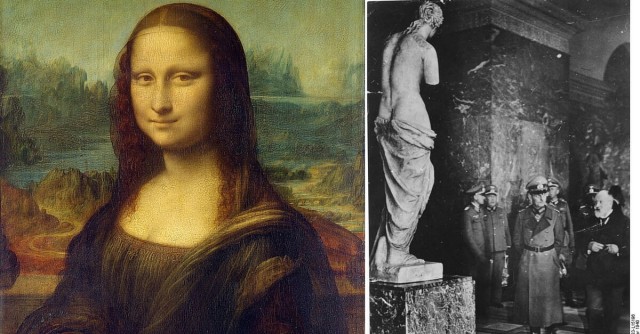 The Louvre Art Museum hosts many visitors, who come to especially see the famous painting, Mona Lisa.  During the war, the Nazi stole art from private museums and homes and one of their main targets was the Louvre. .Little do people know that without the work of one man during World War II, it is most likely the Mona Liza  would have been destroyed or never recovered.

The Nazis during the war stole many art treasures. They believed that they were entitled to these treasures as the victors.  Many of those pieces have unfortunately never been returned to their rightful owners. Some of those owners were most likely murdered in the Nazi death camps. Even today there are dozens of lawsuits relating to the missing pieces and their return.

The Nazis continued to loot dozens of homes and art museums under the leadership of Hermann Goring, the Reichsmarschall of the Third Reich. The art pieces obtained from the looting were considered to be the largest private collection, even exceeding the collections at the Metropolitan in New York, the British Museum in London, the Louvre in Paris, and Tretiakov Gallery in Moscow. By the end of the war the Nazis had stolen about one-fifth of the world’s art treasures. However, they were never able to steal the treasures of the Louvre.

One man in particular was responsible for saving the art of the Louvre. To showcase the work of the man who saved the Louvre, there will be a new documentary released, The Man Who Saved the Louvre. The film was made by French directors and tells the story of how Gurlitt carried out the rescue of the museum. The film’s director, Pierre Pochart, came up with the idea of making the documentary after becoming intrigued by the Hitler’s and the Nazis greed for art, that grew throughout the war.

Beginning in August of 1939, Jacques Jaujard, who was the director of the Louvre , led an underground operation to move as many of the museum’s masterpieces as possible into hiding. Some say that the mission was carried out as if it was a military operation. There were hundreds of workers and volunteers from the museum who helped take part in the relocation; they relied on the one man responsible for the idea to give them clear orders.

On August 25th, right before the Germans invaded Poland, Jaujard had ordered the museum to be closed for three days, claiming this was for repair work. On the first day the top 800 most important works were taken down from the walls, including Leonardo da Vinci’s Mona Lisa. On the second day, there were nearly 4,000 works packed up and put onto a fleet of vehicles. There were hundreds of trucks, ambulances, private cars, and taxis used in moving those paintings. They transported the art works to safety.

Jaujard doesn’t see himself as a hero of the war, but people have seen him as “The Man Who Saved the Louvre.” Thanks to his knowledge of the system in the Louvre, he managed to save thousands of paintings in what is called one of the largest heists in modern history. The best thing about it is that it was right under the noses of the Nazis. Hitler wanted the artwork so bad, he would have sent his Nazis into the museum even before his armies had reached Paris. Jaujard had managed to outfox the Nazis.

Without Jaujard and his dedication to preserving the artwork of the Louvre, we wouldn’t be able to view them to this day and many would have been destroyed. Although the pieces are important in their own right, their significance is even greater now, once we have learned of Jaujard’s story. The film will let the world know the story of the man who saved the Louvre and he will get the recognition that he deserves.