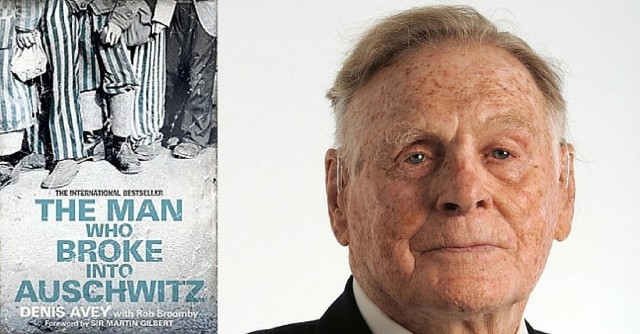 A World War Two veteran and prisoner of war has died aged 96. Denis Avey controversially broke in out of Auschwitz, not once but twice!

Denis was captured and held as a prisoner of war in southern Poland. By swapping uniforms with other prisoners he got access to enter Auschwitz, so that he could review conditions and send back intelligence about the camp.

Denis was used by the Nazis in a labor camp next door to Auschwitz making synthetic rubber. A fellow camp survivor, Ernst Lobethal said that Denis had saved his life as he would give him smuggled cigarettes that Ernst could then sell in exchange for money.

Denis wrote about Auschwitz in his memoirs and told how he would swap uniforms with Auschwitz prisoner and Dutch Jew, Hans.

Some historians disparage Denis’s claims and say that it would have been impossible, but Denis always maintained that he wanted to get access so that he could prove to the wider world that the Nazis were exterminating Jews in their thousands.

Denis said that he accessed the concentration camp twice and that his fellow labor camp prisoners tried to dissuade him from doing it, but in the end helped him, particularly because Denis wanted to find out who was in charge of the camp and responsible for the murders.

Once in Auschwitz Denis spent two nights in the camp, whispering with other prisoners to get information. They then helped him to get out in a return working group back to the labor camp. Denis said that he could remember the smell of the crematorium and seeing people being hung in broad daylight. He said that there was a rampant bartering system among inmates of any belongings in exchange for food scraps.

Denis’s story was never upheld since it was so difficult to corroborate and prove what he had done, particularly since he hadn’t come forward after the war to identify those responsible. However many believed him. Denis said that he did report what he had seen and experienced at Auschwitz to his commanding officer after the war, but that it wasn’t taken any further and when legal parties during the Nuremberg Trials tried to find him to contribute to the case against the Nazis, they were unable to locate him.

Denis was originally from Essex in the south east of England and had joined the British Army as war broke out in 1939. He joined the Rifle Brigade and was deployed to North Africa. He was captured by the Nazis in 1941 and was transported to Italy as a prisoner of war along with around 2000 Allied prisoners.  After several escape attempts, Denis was sent to Germany for more secure imprisonment and ended up at the labour camp at Auschwitz, The Telegraph reports.

Finally five years ago, in 2010, Denis was awarded the British Hero of the Holocaust award by the UK Government.