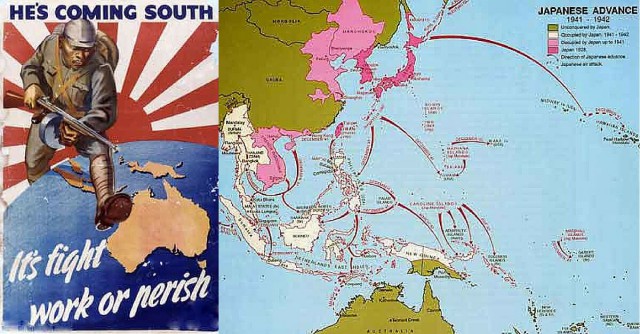 Japanese intentions to invade mainland Australia during World War Two have long been the subject of passionate debate amongst historians worldwide. Some scholars are convinced that the Japanese had made solid preparations to invade mainland Australia but their plans were thwarted by the Allied victory at the Battle of the Coral Sea. Others state that the Japanese were too busy consolidating their position in South East Asia in preparation for the inevitable entry of significant US forces in the region. The theories touted by both of these parties are irrelevant for our purposes. Regardless of their actual intentions, the Japanese “Jungle Blitzkrieg” so seriously concerned Allied military planners that significant resources and manpower were concentrated on the defence of Australia. The important issue is that Australia was fortified for invasion and that plans were drawn for a guerrilla campaign to wear out the Japanese forces before an allied counter attack.

It is a matter of historical record that Australian government and military planners were deeply worried about the prospect of a Japanese invasion and extensive plans and “defence schemes” were devised to defend Australia in the event of large areas of the mainland being occupied by the Japanese. It is known that part of these plans involved pre-positioning stockpiles of civil relief materials and food for use by civilians and military personnel caught in areas of the Australian Mainland overrun by the enemy.

Australian Intelligence had received reports from Chinese and US sources, which seemed to confirm our government’s worst fears. The Curtin government openly admitted its concerns to its citizens and implemented a massive civil defence program. This was accompanied by public announcements about the Japanese threat as evidenced by official posters, pamphlets and radio recordings that exist at the Australian War Memorial in Canberra. 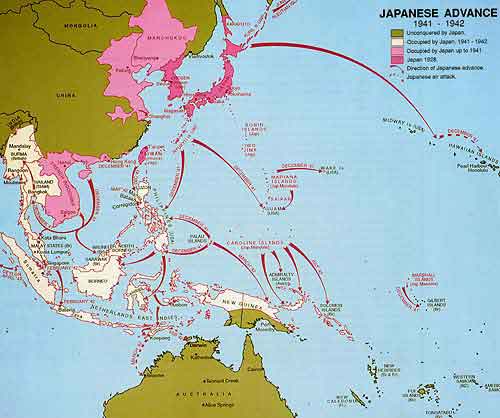 It’s Fight, Work or Perish!
The enemy Thunders at our very gates. Everything we cherish is in immediate peril.

As Australia’s leader I can no longer wait to argue with you, appeal to you or reason with you. There is no time: the danger is too great.

Strikes, lockouts, provocation, profiteering and exploitation increase our national danger. They must cease. What we have done, or are doing, is not as good as what we can do–should do–and must do.

Australian Government’s position on the threat of a Japanese invasion of Australia may not have been far off the mark as originally thought.

New information has come to light suggesting that the the Australian Government’s position on the threat of a Japanese invasion of Australia may not have been far off the mark as originally thought.

According to a United States Office of Strategic Services (OSS) report from October 1942, the Japanese were actively planning an invasion of Australia in June or July 1942. The OSS report is based upon information secretly passed to an OSS asset by neutral Spanish diplomatic staff in Tokyo.

The report extract below appears to be derived from minutes of a Japanese Imperial War Council meeting and details Japanese motivations for carrying out such a costly operation.

The costly lesson learned by the Japanese during their attack at Midway has resulted in the opinion, apparently held by Admiral Suetsugu, that surface operations even with carrier air support cannot successfully be carried out within 750 miles of a strong enemy base of shore-based aircraft. He believes that the Japanese possessions in the Western Pacific can only be made impregnable by concentrating on the strengthening of their air defence and that only Australia remains as an obstacle to the creation of a perfect defensive chain. However, he appears to have felt that Australia has already been reinforced to such an extent that operations designed only to isolate it would cause such heavy losses that its subsequent invasion would be rendered impossible.

The above opinion, claimed to have been voiced at a meeting of Japan’s policy-makers, was in general agreed to by other members, but it was felt that regardless of losses, Australian invasion plans must be pursued. General Tojo, the Prime Minister, agreed that Australia must be reduced.  General Asaka and General Terauchi supported General Tojo, but pointed out that unless Fiji, the New Hebrides and New Caledonia were soon captured, such a plan would have little chance of success and the Japanese gains in the South West Pacific Area would become increasingly endangered. General Tojo expressed the opinion that in order to cut down the losses of naval operations against the Australian mandates, a simultaneous attack by the landing of a massive expeditionary force at several points on the Australian mainland should be undertaken.

In December 1942, Chinese Intelligence sources provided details of what appears to be the general strategic concepts of the proposed operation. The Japanese Military Headquarters had drawn up plans for a large-scale military incursion into the Australian mainland in mid 1942. The concept of the operation was described as follows:

The base of operation was to be situated in the areas comprising the Nan Yang (South Seas) and New Guinea. By adopting a defensive strategy against the US naval forces the Japanese hoped to be able to defend their left flank. The main defence for this flank was a massive minefield in the Straits of Malacca. This would effectively block any naval force attacking the Japanese supply areas from the Indian Ocean.

A force consisting of warships and transports was to make a lightning attack on Darwin in the hope of drawing US and Australian forces into the isolated areas between Katherine and Birdum. Then the main invasion force would set out from Sunda Strait and Christmas Island and land on the Australian coast in the vicinity of Fremantle. The Japanese would then attempt to control the railways and harbour facilities west of Esperance Bay and Sandstone before advancing eastward.

The operation was originally planned to take place in mid-June 1942 with Japanese military supplies stockpiled at a large base at Java in the Netherlands East Indies (now the Republic of Indonesia). Japanese troop transportation and reception centres were established throughout the area and plans were drawn to secure the sea and air routes down the Northwest coast of Australia.

The attack was apparently postponed on account of US-led counter-attacks such as the Battle of the Coral Sea and once the Japanese started to lose their initiative and were forced to concentrate on defending the areas they had already annexed, the Invasion of Australia plans were never implemented. The authenticity of the invasion plan as described by the Chinese sources is a matter of contention.

Some academics argue that the plan above is a fake and that the Chinese may have thought that an authentic-looking Japanese invasion plan might have forced the Allies to fast-track plans to clear the enemy from Southeast Asia. This would have helped make China a major theatre for Allied operations rather than the Southwest Pacific. The truth is almost certainly lost to the mists of time, but the plan is included here to illustrate the kind of intelligence acted upon by the Curtin government. It certainly helps to explain why the Australian government was publicly discussing a pending Japanese invasion well into 1944 when, as we know now, the Japanese were barely capable of defending the Japanese Home Islands, the Philippines and their Mandated Territories. 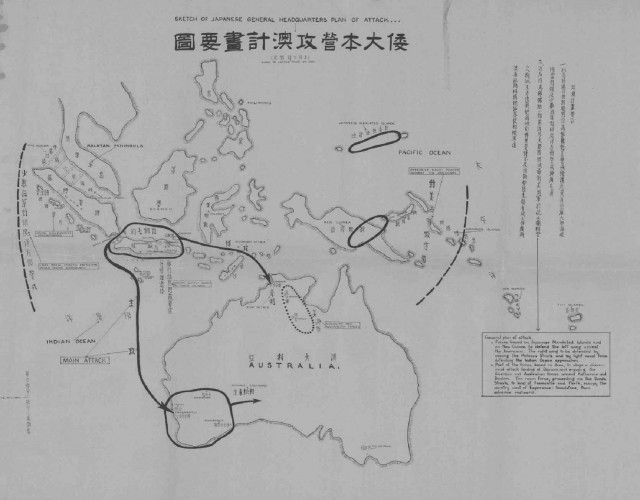 ABMM has uncovered evidence for the existence of a secret Japanese “Bush” airstrip in Arnhem Land in the Northern Territory as well as evidence of Japanese espionage activities in Far North Queensland.

PR XXXXXX
PERSONAL FOR DPR FROM SO1 (PR). 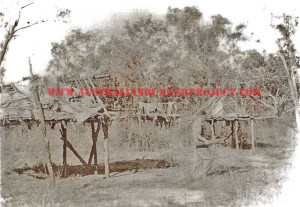 We located a “village” of stilted huts on a meander of the XXXX River approx eight miles inland adjacent to what appeared to be a level and graded claypan area on which we landed. Together we cut way through dense undergrowth to “village” where several photographs, subsequently confiscated, were taken by XXXXXX and myself. Village consisted of approximately 12 huts, built on stilts with floor level about feet six inches six above ground level reached by ladder from ground. Noted that rungs of ladder all made from bush vines and timber had been lashed in position with diagonal lashings, started and finished with a clove hitch. Structures appeared to have been laid out with some purpose in mind. There were two large shelters at ground level approx 12’ x 12’ which although structurally identical with other huts were at ground level. On floor of one of these I picked up a spark plug which was of the screw headed aircraft type. There was no other sign of native occupancy. No natives were seen, the ashes of two fires were found – both old fires as rain marks were visible in the ash and there had been no rain for some weeks. After inspecting village for approx one hour we returned to aircraft and noticed a pole approximately 15’ high with a wire loop at its head. We agreed that this had probably been a wind sock, although no vestige of material was visible. Subsequently on my return to Canberra, late Jul 59, photographs of the village were seen on my desk by Maj XX XXXXXX of DRAC, who alleged that the huts were identical with those which POW were made to build by the Japanese on the Burma Siam railway. 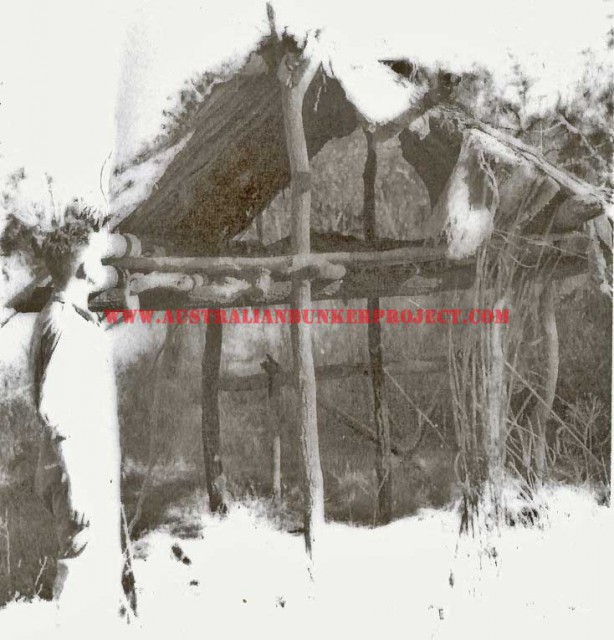 My scepticism caused XXXXXX to have me verify his statement with Mr. XXXX XXXXX (now XXX, dept of external territories Canberra) who corroborated XXXXXX’s statement. Both were POW working on the railway. This caused my enquiry to DMI as to whether we had any knowledge of a temporary Allied war time airstrip in this vicinity. I was informed a few days later that we had no knowledge of any Allied airstrip even remotely near the area. The story previously written by Maj (now Lt Col) XXXXXX at XXXXXX before he left there about a week ahead of me was never released nor were the pictures. In 1961 I met in Sydney in company with the then Private Secretary to the Minister an officer who alleged, without any knowledge of this story, that he had been despatched from XXXX XXXXX mission with a small party of troops to look for a supposed Japanese airfield. I assumed that this probably arose from XXXXXX’s report based on what the natives had told him referred to above. This officer laughingly told me that he and his party had regarded the story as preposterous and had only been a few miles north of the XXXX XXXXX mission before camping for about three weeks, during which time they fished and lazed about. I asked him discretely had any parties been as far north as XXXX XXXX Bay. He scoffed and said that country was only good for the crocodiles and the blacks and nobody in his right mind would go there.

If this airfield was occupied by the Japanese and if this officer’s party did not go beyond XXXX XXXXX Mission it appears possible that such an airstrip could have been constructed and used during world war 2 as the Japanese knowledge of the coastline and its geography was infinitely better than ours until as recently as 1959 when the survey party to which I was attached began accurately mapping the area.

About the  Australian Bunker & Military Museum

This Australian Bunker & Military Museum is dedicated to All the Australian and Allied Servicemen who were not recognized for the part they played in the Defence of Australia. Seeing that underground installations were top secret, still to this day the Servicemen that are remaining feel that they cannot speak of one of the greatest feats undertaken on Australian soil.

Visit their site at: http://abmm.org/