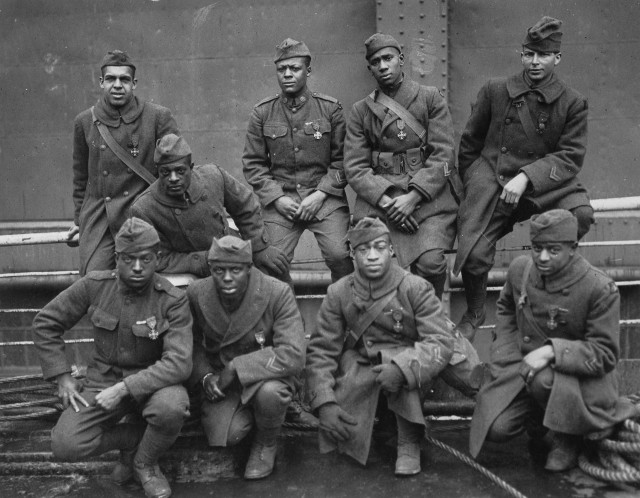 In World War I, nearly 380,000 African-Americans served in the U.S. Army. African-American soldiers primarily served in the 92nd and 93rd Division. While there was no official segregation policy outlined in the draft, African-American volunteers were told tear off one corner of their military identity cards so they could be identified and separated from their white counterparts. These all-black units served mostly under white officers and were assigned to non-combat roles, such as digging ditches, building roads, and supplying the front lines. Throughout the course of the war, only about one in ten African-Americans in the U.S. military served in a combat role. The 369th Infantry Regiment of the 93rd Division, nicknamed the Harlem Hellfighters, was one of the exceptions.

The 369th Infantry Regiment was originally shipped to France in December of 1917. They were meant to stay on the side-lines, but their fortunes changed when General John Pershing assigned them to the 16th Division of the French Army. The French Army, unlike the Americans, were happy to accept any soldier willing to fight, regardless of race. In March 1918, the regiment began training under French command. Although the assigning of these soldiers was expected to be temporary, but members of the 369th never again served under American command during the war, and by the summer they were fighting in the Champagne-Marne Defensive and the Aisne-Marne Offensive.

Known for their stubbornness and refusal to cede an inch of ground, the 369th soon became one of the most feared Allied units. They were given the nickname “Harlem Hellfighters” by the Germans, and since over 70 percent of the unit called Harlem “home”, the name stuck. Their French allies gave them another nickname: Men of Bronze. The Harlem Hellfighters would spend 191 consecutive days out on the front lines, the most of any American regiment during the war.

During the Meuse-Argonne Offensive, which began on September 26 of 1918, the Harlem Hellfighters captured the town of Ripont and pushed forward one kilometer the following day. By the end of the month, they had advanced to a critical position near Séchault, capturing a key railroad junction. These advances cost the regiment 851 men, dead or wounded in a matter of days. In recognition of their bravery, 171 officers and men received medals for bravery, while the entire regiment received the Croix de Guerre, from the French Government.

Off the battlefield, the Harlem Hellfighters entertained their European fellow-soldiers with jazz and American ragtime music. The 369th Infantry Jazz Band, also known as the Hellfighters, was led by James Reese Europe.

At the end of the Great War, the Hellfighters jazz band would perform for more than one million people as they marched up Fifth Avenue in New York City during the victory parade. Following the war, people welcomed these brave soldiers home.

Despite this, not much had changed in the day-to-day lives of these war heroes. The terrible ‘Red Summer’ of 1919 saw the eruption of anti-black riots in twenty-six different cities, and the lynching of African-Americans were on the rise. At least ten of the seventy-seven lynching victims were war veterans and some were even lynched while in uniform. It would take another war, as well as decades of civil rights movements, before equality was achieved. The U.S. military remained segregated until 1948, and it wasn’t until very recently that some of the inequality was addressed and partially remedied.

In 2014, legislation was passed in Congress to pave the way for Sgt. Henry Johnson, who served in the 369th regiment, to receive the Medal of Honor for his actions during World War I. Due to racism in the Armed Services, many African-Americans were not awarded  the honor for their services in the Great War.

As for those soldiers who fell in battle, a total of 169 came from the 369th Infantry Regiment, they are buried at ABMC cemeteries. A majority are at Meuse-Argonne, but some soldiers were laid to rest at Aisne-Marne, Oise-Aisne, St. Mihiel, and Suresnes. All AMBC sites are integrated—race and rank had no influence on a dead soldier’s final resting place.