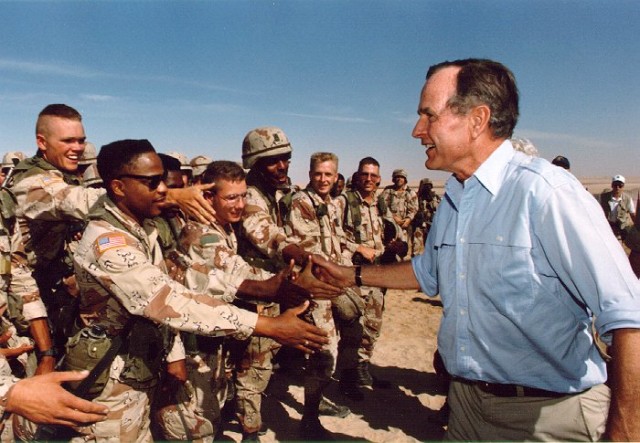 On August 2, 1990, four days after Iraqi dictator Saddam Hussein invaded Kuwait, U.S. President George H. W. Bush declared that this could not go on; the US would not just sit back and watch. President Bush, with the aid of the U.N. Security Council, put in place an embargo on Iraq and seized its foreign assets.

At the time of the embargo, and following Saddam’s invasion, Kuwait was declared as Iraq’s 19th province. Saddam had the fourth-largest army in the world on his side and was well on his way to fulfilling his goal of establishing Iraq as the most dominant power in the region with control of two-thirds of the Earth’s oil reserves.

President George Bush led the coalition opposed to Saddam. General Norman Schwarzkopf commanded a military coalition made up of 700,000 international troops, including the U.S. military and those of key Arab states. Their first mission was named Operation Desert Shield and its aim was to prevent Saddam Hussein’s forces from invading Saudi Arabia. At the same time diplomats were tasked with persuading Saddam Hussein to withdraw. Operation Desert Storm was the second back-up mission put in place so that should the first prove unsuccessful the coalition would use arms in order to force a withdrawal.

The Operation Desert Shield mission failed. Saddam refused to withdraw, as he was confident that the U.S. would go to war in unchartered territory. He was about to be proved very wrong.

Taking lessons made from the mistakes of the Vietnam War, the U.S. military prepared for Operation Desert Storm by arming themselves with state-of-the-art weapons technology. This new U.S. military would no longer approach war with long drawn-out operations and inefficient insurgencies; they would simply fight the enemy the old fashioned way. The Persian Gulf War began.

On January 17, 1991, the air campaign, known as phase one of Operation Desert Storm, commenced. Key command and control targets in downtown Baghdad were destroyed and 35 Iraqi fighters were killed. Iraq’s surface-to-air-missiles were taken out by British and American fighter bombers. Crucially, Iraq’s chemical and nuclear weapons production facilities were also targeted and destroyed.

For the next 30 days the Allied air attacks were so fierce and relentless that they led to the desertion of approximately 80,000 Iraqi troops.

A secondary ground attack, led by the 1st and 2nd Marine Divisions headed straight for key oil fields and Kuwait City. The Iraq army’s defenses had been battered in the air attacks which meant that their attempts at a counterattack were ineffective and they could not  hold back the advancing Marines and stop them reaching Kuwait City. The city was liberated by Arab forces after only two days of fighting.

The combination of these sophisticated air and ground attacks eventually brought the underprepared Iraqi army to its knees. President Bush ordered a ceasefire on February 28, the negotiations of which resulted in Iraq promising to abide by all U.N. resolutions. This was put in place on March 3.

America’s victory in the Gulf War was celebrated throughout the country. President Bush declared that America had finally “kicked the Vietnam syndrome once and for all.” The U.S. military was held in high prestige and was referred to by Bush and other world leaders as the “New World Order.”

However, the U.S. would not be allowed to wallow in this feeling of renewed and invigorated self-confidence. Saddam had managed to retain an ample number of forces with plans to strike against the Kurds and the Shiites. The American and British air forces had to  control patrolling the skies in northern and southern regions by putting up no-fly zones.

The ceasefire put in place by President Bush was swiftly implemented in order to keep soldier and civilian casualties to a minimum. This move was deemed a political rather than a military decision. Many viewed this as a serious mistake.

America’s new approach to military intervention in the Gulf War continued to be utilized in the years that followed, by both the Clinton and Bush administrations in particular. However, there were those who were skeptical that military strength alone would be enough to win the day. President Bush chose to ignore the wise words of Massachusetts Institute of Technology military expert Barry Posen when he warned Bush and his chief advisors not to rest on their laurels:

“We must not confuse what we did here with using military power to redirect the domestic politics of society.”

Wise words indeed when one considers all that has happened since the Second Gulf War.