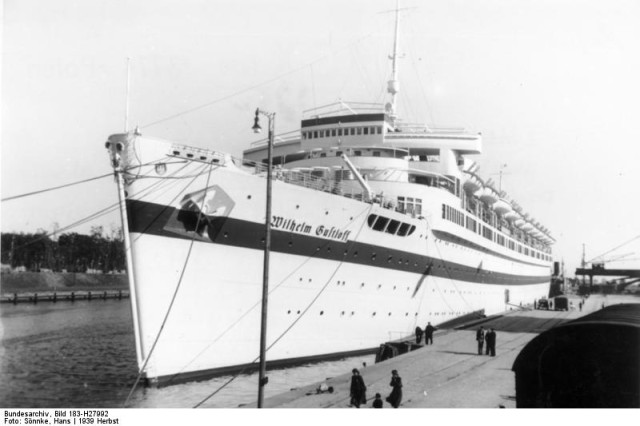 The Titanic was one of the greatest maritime tragedies and the sinking of the Lusitania was a wartime catastrophe. Both events, while disastrous, lost far fewer people than the Wilhelm Gustloff. This ocean liner was sunk by a Soviet submarine on January 30th, 1945. Of the 9,343 people killed, the majority were war refugees (Germans, Lithuanians, Polish, Prussians, Latvians, Estonians, and Croatians) and over 5,000 were children.

World War II was drawing to an end with the Nazi regime nearing its fall. Many saw the writing on the wall and desperately fled Germany and 10,582 people crammed aboard a ship designed to hold only 1,900. There were not nearly enough lifeboats for everyone, and many of these were frozen to the deck and useless. The Soviet submarine hit the cruise ship with three torpedoes. Most of the passengers drowned in the icy waters of the Baltics sea.

Despite the high number of casualties, so few know about this tragedy. Novelist Ruta Sepetys decided she wanted to raise awareness of the event 5an event of this magnitude. She wrote a book entitled Salt to the Sea, which was released on February 16, about fictional characters on the Wilhelm Gustloff. Sepetys is drawn to “hidden histories,” as her first novel Between Shades of Grey shares a character crossover with her latest young adult novel.

Her interest in the sinking of Wilhelm Gustloff was ignited when she found out she had a cousin who almost boarded the cruise ship. The cousin opted to delay her travel, but as the ship departed she really felt she had made the wrong decision. It turns out that decision likely saved her life.

Sepetys was able to track down two divers who explored the wreckage in the 1960s, in a Soviet operation. The Soviets wanted to search the ship to repossess any treasure that had sunk with it, and eventually ordered parts of the wreckage to be blown up. It was considered an obstruction to shipping that needed to be dealt with.

Sepetys has a couple of theories to explain why a tragedy of this magnitude was covered up. The Nazis did not want word to get out that people were fleeing, to avoid a further drop in the public’s morale. At that point in the war it was quite clear that the  Nazi’s would be defeated. There are some survivors who did speak about the event, but reported that shortly after they received a knock on their door, by the authorities telling them to stop spreading lies.

In the post war period the West and East German governments did not want to offend the Soviets. Other Germans were hesitant to report that they had been victims of anything during that war. Or perhaps it was due to the fact that the submarine captain who sank the cruise ship was later dishonorably discharged for alleged neglect of duty, by the Soviet navy and this led to information about the sinking being suppressed.

Sepetys was also drawn to this topic as a refugee story, since her Lithuanian father had resided in refugee camps for nine years before relocating to the United States. The similarity between the migrant influx to Europe today and the plight of refugees during World War II was an unexpected coincidence. This allows the readers to draw parallels between the past and today .

The author hopes that readers will get to know the protagonists of her novel and find a way to empathize with them and understand  the unimaginable challenges people fleeing war face. Many people have no concept of a war-torn country, or what it means to be forced out of the only country you know.

Sepetys hopes that through her story and characters people can connect in a way that makes history and the current news seem human and help them to understand the cruelty of war.