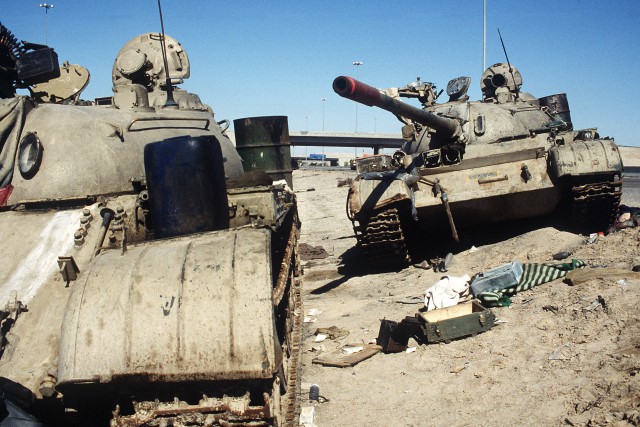 Two Iraqi T-55 main battle tanks lie abandoned on the Basra-Kuwait Highway near Kuwait City after the release of Iraqi forces from the city during Operation Desert Storm.

The first Gulf War in 1990 lasted less than a year and took place between an Allied coalition led by the United States and Iraqi forces which had invaded neighboring Kuwait. The mission became known by its military name Operation Desert Storm.

The Allies consisted of troops and support from almost 40 countries including from the nearby Middle East, Europe, Britain and Asia Pacific.

Around 670,000 troops took part in the mission, with more than half of those from the United States. The cost of the military efforts is suggested to have been over $61 billion for the US alone, while other countries contributed around $50 billion.

The offensive on the occupying Iraqi troops is thought to have killed over 100,000 Iraqi soldiers, while the Allies suffered around 400 soldiers killed in action.

It was the beginning of August in 1990 when Iraq decided to invade Kuwait. The country’s president Saddam Hussein made the move to try and take over Kuwait so that it could gain some of the small nation’s riches made from oil. Iraq at the time was struggling to pay off its national debts and was struggling to survive after it was eight years at war with its other neighbor Iran.

The United Nations immediately declared a denunciation of Iraq’s invasion of Kuwait and within a week had imposed tough sanctions on Iraq in an attempt to convince the country to withdraw.

When Iraq refused to withdraw, US President George H.W. Bush commanded Operation Desert Shield to begin, which ensured a build-up of Allied troops and military equipment to the region.

A few months later, the United Nations agreed to sanction military action in the region in order to force Iraq to withdraw from Kuwait. But military action was not allowed to begin until the middle of January, and so Operation Desert Storm commenced on 16th January 1991 with massive air strikes across Iraqi positions in Kuwait, the WPTZ.com reports.

A month later the Allies launched a ground attack and sent troops in to combat Iraqi troops on the ground. A few days in and Iraq says that it will comply with UN requirements and begins to withdraw from Kuwait.

By the end of February fighting had finished and a few weeks later the leader of Kuwait, Emir al-Sabah, returned home. A cease-fire agreement is signed at the beginning of April and on the 11th April 1991 the UN declared the war in Kuwait was at an end.