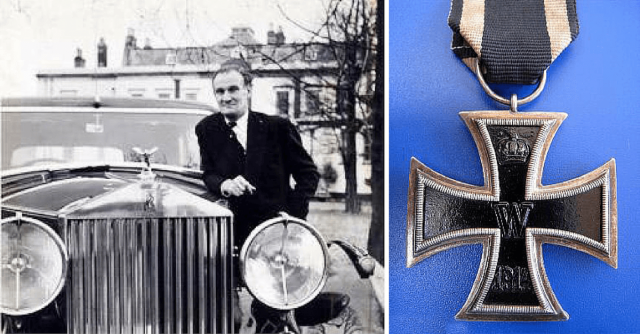 In Jersey there was a respectable establishment, the Hotel de la Plage — an ideal hotel with a respectable landlady and good, reliable staff. It was 1938 and, while war clouds might be brewing in the outside world, inside the walls of the hotel everything was proper and orderly.

Eddie Chapman, all around con-artist armed with a laundry list of less-than-savory skills, was certainly not as respectable. He sat in his hotel room with a blond woman, awaiting the arrival of the police. When they did burst into the room, Chapman stood up, kissed the woman, and made a daring jump through the closed window to the ground below, in a James Bond-like escape. The man had learned all the evasion tricks over his decades-long criminal run, yet that night his career came to a screeching halt when the police caught up to him and tossed him in jail, the Mail Online reports.

When the Nazis invaded the Channel Islands in 1940, they came to the prison where Eddie was being held, looking for people who could give them a hand in undermining the British. Eddie was an extraordinary opportunist, so he offered his skills to the Germans as a spy. After intense training, he became a super-spy. Like James Bond, Chapman was clean-shaven, a womanizer with great charm, and a slick liar.

He returned to Cambridgeshire to officially start his services for the Germans. His goal was to destroy the aircraft factory in Hertfordshire, yet upon landing he turned himself in to the police and convinced them his loyalties had never faltered. Chapman offered his services to MI5 as a double-agent. MI5 was so thrilled they faked an explosion and gave Chapman photographs of it to take back to his Germanic masters, who were completely fooled.

His MI5 handler was Ronnie Reed, who was the leading radio expert for that covert unit. Reed was very impressed with this patriotic crook, and covered for Chapman so regularly that the Germans awarded Chapman the Iron Cross for a ‘job well done’.  Being the only Englishman to be so honored, he also received a teaching position at the Nazi spy school in Norway. There, he seduced the blond Dagmar Lahlum and convinced her to work for MI5 as well.

British officials didn’t like that Chapman was a super-spy who had spent his pre-war career breaking into bank safes.  Despite his efforts on behalf of the British Empire, officials let him go with a generous pay-off. That was fine for Chapman, because he was still accumulating a fair amount of money as the Germans’ spy.

After the war, Chapman went back to being a crook — marrying the blond, Betty Farmer, who had been with him that fateful night at the Hotel de la Plage in Jersey.  His remaining days were eventful as well, but he passed away in 1997.  His life was so glamorous and exciting that plans have been made to turn his WWII adventures into a movie. If that happens, it certainly has the potential to be one of the best spy films to come out in recent years.