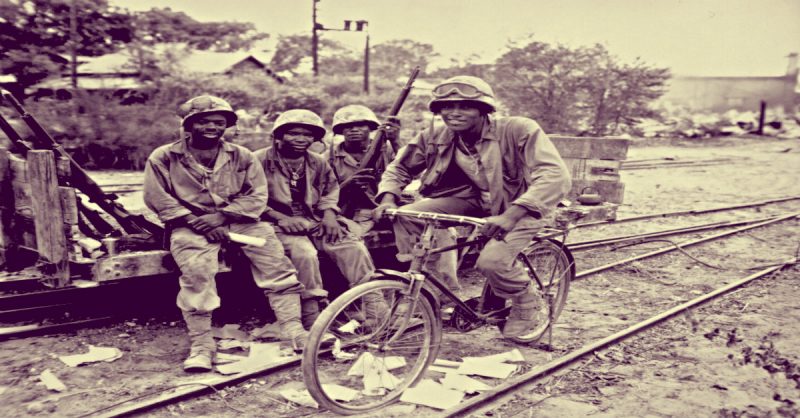 Black Americans – about one million of them – are one group of US soldiers who fought bravely like anybody else during the Second World War in defense of their home country. However, until now their efforts seven decades ago remain largely unnoticed because of one factor — they were black.

Thankfully, efforts have been exerted to remedy that oversight.

Black is for Bravery

The Japanese island of Iwo Jima was one of the areas within WWII’s Pacific Front that saw fierce fighting between the Americans and the Japs. As a matter of fact, the US Army incurred heavy losses during the Battle of Iwo Jima. It was also in this conflict that one of the most iconic images of World War Two was taken — the raising of the American flag on top of Iwo Jima’s Mount Suribachi.

But there’s so much more to the story of the Battle of Iwo Jima than what the public knows. Even Hollywood in the form of The Sands of Iwo Jima [1949] and Flag Of Our Fathers [2006] missed one truth — that Black Americans also fought in there.

Thomas McPhatter, a Black American WWII veteran, was one of the 900 brave African Americans who fought in Iwo Jima. But then, the US Army was segregated in his time and McPhatter, along with the others, did not see the recognition they so rightly deserved.

Alice Mills, an English professor in the Université of Caen in France, resolves to remedy the oversight suffered by the African-Americans who fought during WWII but whose bravery are pushed to the side.

“I’m surprised that I do not see pictures of black soldiers in D-Day memorials . . .” she disclosed in an interview.

In a bid to change that, she searched deep into the National Archives and has discovered a treasure trove of pictures of African-Americans who fought during the Second World War, especially during the D-Day Landings, including the photos of the all-black unit, the 320th Anti-Aircraft Battalion.

Sergeant George Davison was one of the members of the said all-black unit. he manned a helium-filled barrage balloon. These balloons flew above the beaches during the D-Day Landings as a means to prevent enemy aircraft from strafing the assaulting infantry and armor. The balloons exploded upon contact with the German fighter planes.

Mills located the WWII vet’s son, Bill Davison, in Pennsylvania. Bill disclosed that his father kept mum about his experiences during the war. But he left a diary, his account of what it was like during the landings.

The picture his diary painted was gruesome.

Sergeant Davison died way back in 2002 without receiving any awards or recognition for his WWII service.

Nevertheless, thanks to Alice Mills as well as the others making effort to put black faces visible in WWII history, one can already see pictures of black soldiers in D-Day memorials and other exhibits.

Slowly, the lost and often untold stories of these brave Black Americans are becoming known to the public.