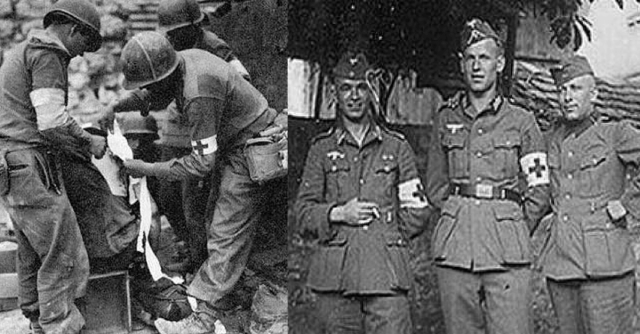 In the North African region and most part of Western Europe, troops were very considerate of the medics, and mostly restrained from engaging with any personnel associated with the medical team. There were a number of incidences where both sides agreed on some sort of a truce to allow the medics to tend the wounded and evacuate them from the battlefields.

Following are a few of the episodes that give a varying account of the treatment medics had to endure during the Second World War. A detailed account is available in Gerald F. Lindeman’s book ‘The World Within War: America’s combat Experience in World War II’.

In 1945, three men from the US 9th Infantry Division deployed near Reagan were on a routine patrol, when they came across a German soldier. Upon investigation they found out that the soldier in question was actually a doctor. He also told the American soldiers that he had other members of his medical team stuck in the woods since their truck had no gas. US infantrymen sent a soldier to get them gas and handed them over to the Germans, all 43 of them. This was a strange gesture because Germans were already low on medics and were in dire need of medical attention.

In a separate incident, a wounded American soldier was calling for help but no one could dare get him out of the line of fire. There came a stage when the soldier started crying out of pain, a medic could not see this anymore and decided to help the wounded soldier. He took his Red Cross flag and went to help him, anticipating that he would not get shot since he was a medic. Instead he was instantly cut into two with a machine gun burst from a SS soldier, who kept on firing at him and at the wounded soldier, almost as if he was enjoying it. Reportedly a number of SS soldiers used wounded soldiers as bait to get more kills under their belt.

Although one can conclude from above mentioned examples that German Army was barbarian and did not respect medics while US and Allies did, however this could not be any further from truth. Allied forces especially Canadian troops gained this reputation during the war for not respecting the surrender of enemy troops or firing at the medics. There are many examples on Allied sides as well regarding unnecessary killing of German medics. This was primarily because German medics were allowed to carry a pistol with them, whereas Allied medics were completely unarmed, the SF Gate reports.

In the Pacific theatre, there was no example of niceties from both sides. Both US and Japan considered anything from the enemy side a legitimate target and often medics and war journalists got the bullet.

The stories of the medics and war journalists in the First and then Second World War are often buried under the heroic tales of the troops, but these medics faced equal peril and faced same problems, just like regular armed troops.