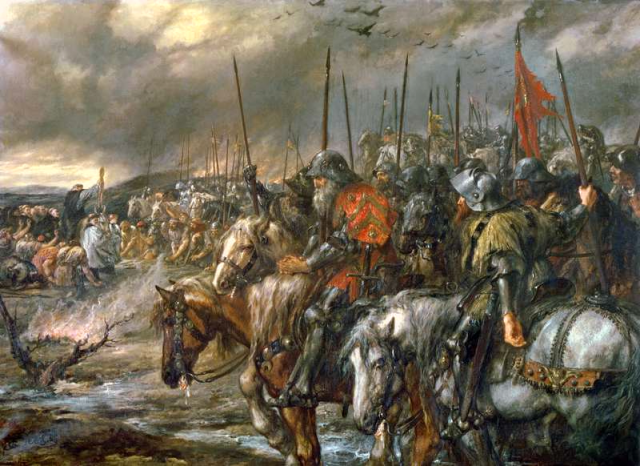 The Battle of Agincourt has a very special place in the English history and is considered the greatest English victory. Despite the small numbers, Henry V of England managed to defeat a much superior French Army. Following are the ten reasons why French could not win the battle despite their much larger Army and equipment.

One of the factors that really hampered French victory was the way French soldiers dressed for the combat. Their heavy armors, almost 50 kg, restricted the soldier’s movement in the battlefield. On the other side, the British soldiers’ armors were not that bulky and this gave them an edge over French troops.

The weather was not on French side on the day, heavy rainfall in the days leading up to the battle turned the battlefield into a swamp of mud. Heavy armors and muddy fields made things even more difficult for the soldiers, who got fatigued even before the start of the battle.

British Army had much more trained archers with very sophisticated longbows. British archers could wound at 400 yards, and could manage a certain kill at 200 yards. If the target was within 100 yards range, arrows could penetrate through the armors. French lacked this expertise and had to face the consequences.

French Army was over crowded and troops were not properly aligned to face the opposition. The crowding of the soldiers meant there was a limited space for a soldiers to work with, this gave English another edge and they took advantage of French crowding troops.

The lack of authority in the French ranks meant that there was disorganization on every level of the ranks. The French King was not a worthy commander due to his mental health issues and lack of involvement in military affairs. He transferred the authority of the battlefield matters to Charles d’Albert and Boucicault; both men were unable to gain the respect from the troops due to their lower ranks. In English columns, soldiers and commanders had great respect for Henry V, and they considered him a great leader and charismatic commander.

On top of crowded formation, heavy armors and lack of discipline, troops had to face another impediment; a narrow battlefield. The French army during that period of time was not cut out for a constricted battlefield combat; discipline and preparedness of the English soldiers overpowered the French with great ease.

French Army was mostly consisted of knights and local peasants. French leaders had always believed on high numbers and assumed that numbers alone could intimidate enemies to kneel. Henry V, on the other hand, was a firm believer of a trained, much smaller but highly disciplined army. He recruited skillful and brilliant people into his army and trained them so well that they could compete with any European army.

French commanders were so confident in terms of their high numbers, that they thought they could dictate the terms of the battle. But Henry was not that patient; his army was prepared and could not be the part of French delaying tactics. He ordered his army to mount a surprise attack. A hail of arrows and surprise factor gave the English an edge and scores of French died without taking part in the battle. This was the largest morale breaker in the French ranks.

The reason behind the delay was the French commanders’ decision to ask for more army contingents for the battle. As mentioned above French military mindset revolved around the high numbers, and in almost all cases French would equate victory with numbers and did not pay much heed towards planning and discipline, The Telegraph reports.

Over confidence is said to be the single most deadly sin the French Army committed towards this battle. They were so proud of their high numbers that French army had already started preparing to celebrate the victory, even before the first arrow was released. Some soldiers had prepared the special cart to parade the defeated English King. The night before the combat, when English soldiers were planning and preparing, the French ranks sang the songs of victory and taunted the English for their small numbers and imminent defeat.