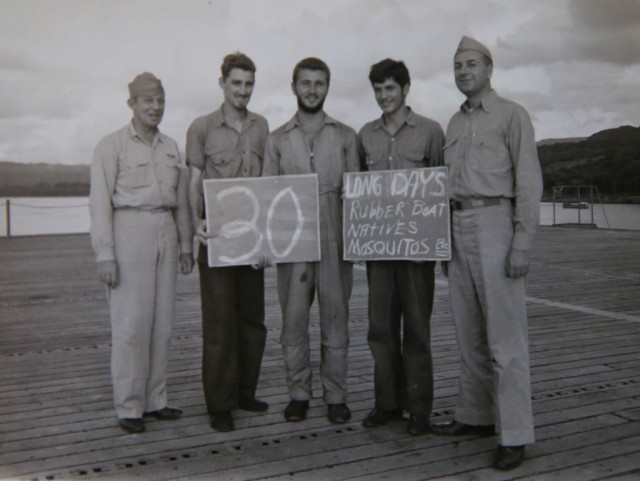 The story of World War Two Pacific survival by a veteran who was presumed dead and lost at sea, but in fact survived, has been uncovered.

A three-man crew in a US Navy torpedo bomber of B.J. Skuda, Lawrence O’Neal and John Boosalis had crashed at sea in the Pacific while they were on patrol looking for enemy submarines. The three survived the crash but then had to survive the vast expanse of ocean that held them.

They had a rubber life-raft that had emerged from their wreckage and all jumped in. But they were tired, thirsty and bewildered from the crash. They began to make their way towards an island they could see in the distance, but fighting against the tide and with just their arms as oars they made slow progress.

It was John who jumped back into the water so that he could try to push the boat along and make their journey quicker. But as he did so they suddenly noticed a dark shadow in the water. It was a shark. He jumped straight back in to the raft.

Now, at 72 years of age, John recounts his lost at sea story – of courage, peril and luck. He hadn’t spoken of the experience until recently.

The three-man crew not only survived sharks, hunger and thirst, but also snakes and mosquitoes, before finally reaching their Navy division four weeks after their crash.

When they made it to the distant island, they were lucky enough to find friendly natives and an Australian farmer to help them.

The crew were from the USS Suwannee, and John, who is now 96 years old, says he doesn’t remember feeling fear, but that they were just doing their job, the Omaha.com reports.

All three were classified as missing in action once their plane had crashed and it wasn’t rescinded until a month later when they made it back to their Navy unit.

John is from Minnesota, but moved to Lincoln in Nebraska with his wife in 1961. He became an owner and partner in a local private country club, where he also ran the restaurant with his wife, which his son now manages.

John joined the US Navy in 1941 and was in training when the Japanese Imperial Navy bombed Pearl Harbour, bringing the US into the war. John and his five brothers all served in World War Two and all survived.