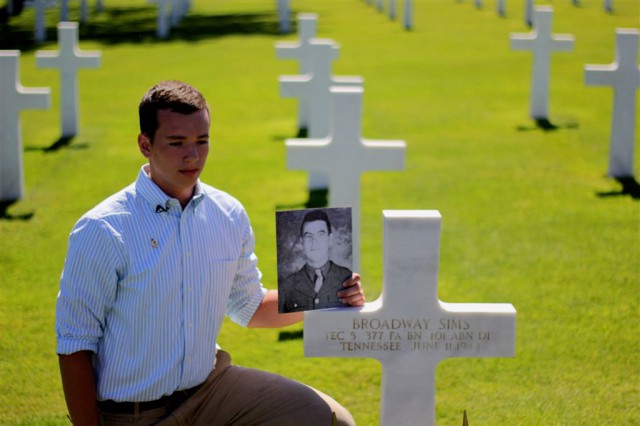 For many, visiting war memorials and reading the names of the countless dead, it’s hard to imagine the real person behind the name.  There are just so many that it doesn’t feel real. But for Scott Moore, a student at Clarksville’s Northeast High School in Tennessee, it was different. He was so attached to a single fallen soldier that he travelled half way across the world to eulogize him at his grave.

Moore began studying about Broadway Sims at the behest of his teacher. She believed that the National History Day program would give him an opportunity to gain a more personal perspective of World War II by studying it through the lens of a single soldier who had fought and died during it.

Initially Moore chose Broadway Sims as a candidate for his research simply because he had a “cool” name, but he also felt as if he related to this soldier because Sims was a member of the 101st Airborne Division, a unit in which Moore’s father is currently serving as a chief warrant officer.

Broadway Valentine Sims was born in 1916 in the Ripshin community and died at only 28 years old, days after D-Day. His life story was no epic saga, in fact even people from his own community can barely remember him. But as Moore delved deeper and deeper into Sim’s life story, the more connected he felt to this man who paid the ultimate price in defense of his country.

Moore and other participants in the National History Day program travelled to France after completing their research.  For Moore, the experience of visiting Normandy, touring the D-Day battlefields and visiting the American Cemetery was an opportunity to pay respect and bring back to life the memory and legacy of Broadway Sims, the Johnson City Press reports.

“When I first stood by Broadway’s grave, I felt a nervous excitement. I realized I was standing there next to a great man, and that was the closest I would ever be to him. It was an honor to even stand by his grave and deliver my eulogy. I wanted to make him proud and somehow let him know that we had not forgotten him. That his life had not been in vain.”

Moore’s experience as a participant in the National History Day program taught him that behind every name on an Honor List there is an entire life story that should be remembered, respected and celebrated.

As Moore stated in his Eulogy, “I stand here today to honor the life of one of America’s bravest, most fearless servants. As I stand here, I am reminded of General George S. Patton’s words: ‘It is foolish and wrong to mourn the men who died. Rather, we should thank God that such men lived.’ And that is exactly what my purpose here today is, to thank God for allowing such men as Mr. Broadway Valentine Sims to have fought for us and to have honorably given his life, so that others may live.