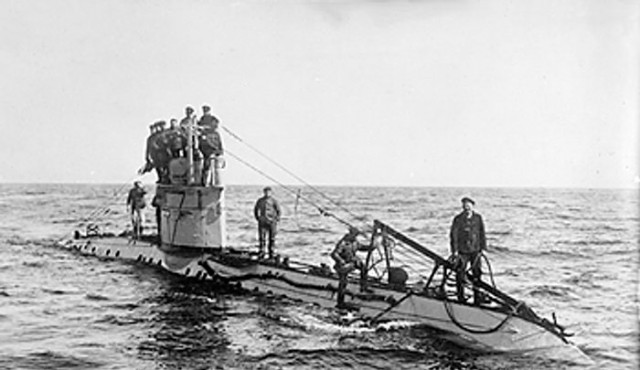 Saving a helpless dog from a certain death? Certainly over a million YouTube hits on this topic in 2015, but a century ago people did not really care about the dogs in peacetime let alone during a World War. In the First World War an incident of U-boat sinking a civilian boat was a common occurrence but saving a dog from an U-boat attack was certainly not.

David Smith was a fisherman from 21 Fort Street, Dundee, and when his ship came under fire by a German U-boat and all his fellow crewmen feared their lives, Smith went into the control room to pick up a terrified dog to the safety of another boat.

David Smith and nine other fishermen were on board one of the most advanced steamer of Dundee, the Scepter, with a maximum speed of 10 knots. The Scepter could easily outrun a German U-Boat, however on a seemingly peaceful day of May 6, it luck ran out and it was targeted.

The Captain of the Scepter Charles Lorimar first heard a few shots at dawn and ignored it but his deep suspicions came to life when he saw a U-boat surfacing very close to its boat. The German U-Boat instantly hoisted a German Flag, a clear indication that they meant business and were out for a kill. Captain Lorimer first tried to make a run for it, but when the Scepter unexpectedly failed to outrun the German boat, Lorimer abandoned his plans to escape and stopped.

The German commander ordered Lorimer to abandon the ship and get on board a Norwegian ship that would take him and his crew to Norwegian port. He also made it very clear that the Scepter is going down instantly after every single crewmember leaves the ship. David Smith was the last person to leave the ship but when he was on board the Norwegian boat he spotted a frightened dog in the control room, he ran back to the steamer and took the poor animal in his arms to the safety of the other ship. Moments after this rescue, German U-Boat fired Six shots on the scepter and in less then six minutes the vessel was on its way to the bottom of the sea, while German soldiers smoked and laughed on the docks of their U-Boat, The Courier reports.

The Norwegian ship dropped the men in Peterhead, clearly defying the German commander orders; all the crewmen were in their homes later that night. The Dog lived thanks to the kindhearted gesture by David Smith, who certainly deserves our appreciation and praise for leaving us such a heart warming story from a deadly World War.