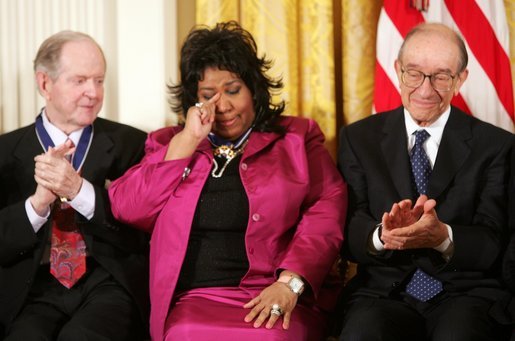 British academic and historian, Robert Conquest, who uncovered the horrors in Eastern Europe and Soviet Union in the run up to and during World War Two has died aged 98.

Conquest was researching the Soviet Union in the 1950s, but was dissatisfied with the analysis and information that the Foreign Office in London had available. Conquest actually worked in the Information Research division of the Foreign Office and managed the British response to Soviet propaganda.

Conquest enrolled in a research fellowship at the London School of Economics and wrote his book, ‘Power and Politics in the USSR’, in the 1960s. His book made him one of the most respected and leading researchers on the Communist power.

Conquest (left) receiving the Presidential Medal of Freedom with Aretha Franklin (middle) and Alan Greenspan (right) at the White House, 2005 [Via]

Almost a decade later, Conquest released his next book entitled, ‘The Great Terror: Stalin’s Purge of the Thirties’, which revealed the extent of the Soviet mission to eradicate enemies of Communism, which included political leaders, academics and intellectuals, as well as the military. This was the first time that the events had been brought together in one place, showing the degree of devastation Stalin had inflicted on his own people.

Around seven million people were imprisoned and in one year alone in the late 1930s around one million were executed, with a further two million killed in concentration camps. Conquest suggests that Stalin was responsible for around 20 million deaths.

In the mid-1980s, Conquest wrote a study called, ‘The Harvest of Sorrow: Soviet Collectivisation and the Terror-Famine’, which uncovered Stalin’s 1930s programme to take grain from Ukraine’s farmers so that the country could by for industrial development paid for by the Russians. A famine ensued in the Ukraine and millions died.

Many of Conquest’s peers say that he was a pioneer for academics working in the field of Soviet studies, The New York Times reports.

Once the Cold War ended and the Soviet Union collapsed, Conquest took to release another work called, ‘The Great Terror: A Reassessment’. It vindicated Conquest’s earlier work and newly available documentation revealed that Conquest’s original findings could be confirmed.

Conquest was born in 1917 in Worcestershire in England. He served in the Light Infantry during World War Two, serving as an intelligence officer in Bulgaria since he could speak Bulgarian.