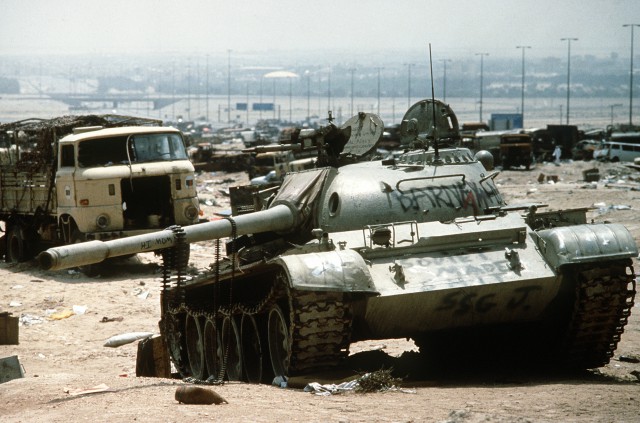 A disabled Iraqi T-55 tank lies among other wreckage along the Highway of Death in April 1991. [Via]

A Soviet tank that was first produced more than 60 years ago is still being used by armies and rebel groups around the world.

The T-54 and T-55 were made by the Soviet Union in the 1950s as part of its armament for the Cold War. The tanks’ controls were simple and easy to manoeuvre and maintain, and so became a firm favourite of the military. Now 60 years on the tanks remain popular with rebel forces and countries with small military forces.

Many ex-Communist nations still have the T-54 and T-55s in operation. They are even found in the Taliban’s range of military vehicles and were used in the Yugoslavian civil war. More recently they have been used by Islamic State (IS).

By the end of World War Two, the T-34 was the most widely used tank by Soviet forces. Even though it had performed effectively against the Nazis, Soviet commanders decided that it was outdated. Another tank model used by the Soviets was the IS series, but its manual loading of shells and charges meant it could not fire very quickly. Meanwhile the T-44 was too small to use in military action.

Therefore Soviet commanders decided that a new tank model and design was required. The T-54 and T-55 were born, and still today are the most widely used tank in the world.

The T-54 later models have few differences that can be noticed by the naked eye. However the T-54s predecessors had a gadget that prevented toxic fumes coming back into the tank from gun fire.

T-54s were first used by the military in Hungary in the mid-1950s when Soviet troops stopped a rebel movement from overthrowing the country’s Communist government.

When the Vietnam War began in the mid-1950s the T-54 was widely used by North Vietnamese troops. It was the backbone of their military operations and could easily sustain attacks from the lighter and more flimsy US produced M-41 tanks, the Medium reports.

The T-55 had mainly internal improvements made to it. It was sealed in case of a nuclear attack and the number of rounds its guns could fire was increased.

Unfortunately, even though the T-54 and T-55 were and still are widely used, they have tended to be used by the losing side in most battles. Inside the conditions for crews are awful, they still shoot terribly slowly, and the suspension is not as good as it could be.