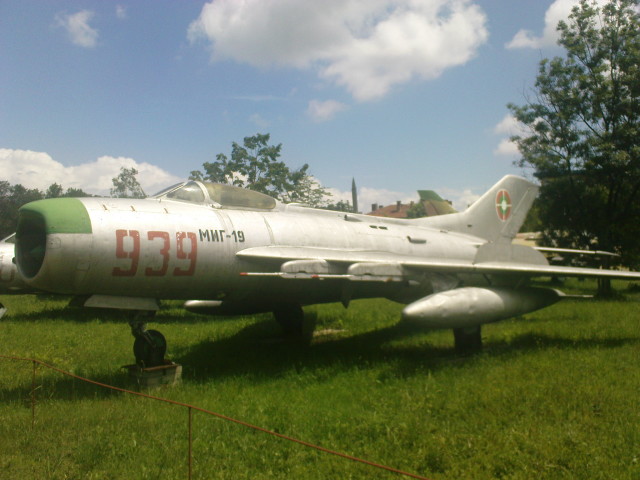 If your pre-flight checklist includes purchasing a plane, head for Albania.

They’re auctioning off 40 Soviet and Chinese fighter jets. Once boasting an elite fighter force, Albania is looking to raise money to modernize its military and save space in its bases. Since becoming a member of NATO, Albania no longer needs the antique aircraft to protect itself from threats over the Adriatic Sea.

There has been so much interest in the planes that the Albanian government has moved the initial auction date back. They are also considering increasing the starting bids from 1.1 million to 1.9 million leks ($8,600 to $14,800).

Defense Minister Mimi Kodheli told the AP that there was a lot of interest from the U.S., Germany, France, and Italy, among other countries. “It was a surprise for us,” the minister said.

Eleven MiG-17 and MiG-19 jets are parked in neat rows, guarded by two military officers. The paint is fading, the guns are rusting, and some of the canopies are broken. Vasil Jongari, 55, a former jet mechanic, is embarrassed to show the planes to visitors.

“There is nostalgia always. But they cannot be kept only on desire,” says Vasil. “They need money, and money we don’t have.”

Ilirjan Kola, a 61-year-old former pilot who flew MiGs in the Albanian air force for 15 years, agrees. “MiGs were so costly,” he told the AP. “A twin-engine MiG-19 consumed 52 liters of fuel a minute. With a normal flight of 30-40 minutes, imagine the expense…. Better that they had sold them before.”

The Albanian air force was founded in 1951. It received MiG aircraft from Russia until 1962. When Enver Hoxha, the Communist leader, led Albania away from Russian ties, China sent over aircraft. This lasted until 1977 when Albania also broke ties with China.

“We were privileged at the time, with specially chosen food, shelter, health care, and vacations,” Kola said. The food came from a nearby farm dedicated to the air base, according to Kola. A doctor tasted the food for them daily.

“[It was no] different from what they did with the food destined for Hoxha himself,” Kola said.

When the Communist government collapsed in 1990, there were 200 jets and 40 helicopters. There were also four IL14 transport planes that were sold for scrap five years ago, after spending years transporting top regime officials.

In 1997, military bases across the country were looted after a pyramid scheme collapsed and cost many Albanians their life savings. During the uprising, seven MiGs were destroyed and parts stolen.

After the uprising ended, some of the jets continued to fly. A fatal accident ended the flights in 2004. One last flight in 2005 was flown as a farewell.

The defense minister said, “We can use the money to modernize our armed forces.”

According to Kodheli, this initiative will serve as a test of the market. There are still 100 aircraft that can be sold if this auction is successful.