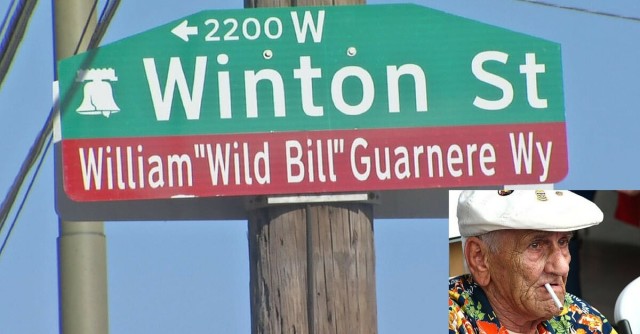 World War Two veteran Bill Guarnere, whose story was told in the television series, ‘Band of Brothers’, has now had a street named after him in South Philadelphia.

Bill died just over a year ago and now local Philadelphia officials have ensured that Bill’s name and memory is immortalised by renaming 2200 block on Winton Street as ‘Wild Bill Way’, after Bill’s nick name – Wild Bill Guarnere.

Kenyatta Johnson, a Philadelphia councilman, uncovered the new Wild Bill Way street sign, which sits between Snyder Avenue and Jackson Street last week. The city said that they wanted to commemorate and honour Bill’s war time sacrifice as well as his love for his home town of Philadelphia.

Bill died in 2014 from a ruptured aneurysm, but made it to a ripe old age of 90 years old. Bill was born in 1923 in South Philadelphia and joined the US 101st Airborne Division during World War Two. He served as an officer in the now famous Easy Company, Second Battalion, 506th Parachute Infantry Regiment.

He joined just before he was about to graduate from South Philadelphia High School in 1941, but the attack on Pearl Harbour occurred e and so Bill left to build tanks for the US war effort at a local factory. Bill’s mother wasn’t so happy, so Bill agreed to do the night shifts so that he could finish school during the day.

Bill joined the paratroopers’ regiment in 1942 and got his nickname ‘Wild Bill’ after his courageous actions on the battlefield.

Military experts say that Bill was one of the best and most courageous of all the Easy Company soldiers. If any battle was going on within his division, Bill would turn up to help his comrades, even if it wasn’t his platoon. Many say that Bill was fearless.

Bill’s war effort ended when he had his right leg blown off when he was trying to help an injured comrade in the Battle for Bastogne. Bill received the Silver Star for his actions at the Brecourt Manor Assault during the D-Day landings. He also received Bronze Stars and two Purple Hearts.