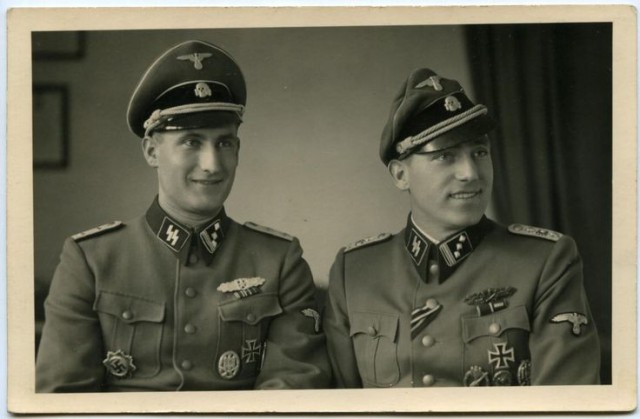 Recently-opened archives in some South American countries have shed new light on the extent of the wide-scale influx of Nazis into the Americas at the end of the Second World War. These refugees were seeking to escape from both punishment for their war crimes and from the ruins of the Third Reich – ruins which they themselves had  brought about.

For a long time it has been known that many high-ranking members of the German Nazi party were helped to escape from Germany towards the end of the Second World War and also for a few years afterwards. Many were given refuge in the countries of South and Central America. Others were smuggled to the USA, where they found safe haven and set up new lives for themselves.

In some cases, the fugitives from justice were acting on their own initiative or with the help of small bands of sympathetic helpers. But in many other cases these movements were part of formal, organised smuggling programmes, set up by countries with ulterior motives.

For instance, the ambitious Operation Paperclip, which lasted from 1949 until 1990, was a clandestine mission established by the predecessor to the CIA and continued by them to help to bring between one and two thousand former Nazi military staff, scientists and engineers from post-war Germany to the USA. Their purpose was to work on espionage and counter-espionage against the Soviet Union and Warsaw Pact countries, and to bring their knowledge to bear on weapons development, most famously the refining and escalation of the US atomic weapons program.

Many other Nazis sought refuge in post-war Argentina, Paraguay, Brazil, Chile and other Latin American countries, as well as other regions such as the Middle East. Many of these countries were ruled as dictatorships or had fascist-leaning governments during the post-war decades.

Nazi minds who were able to offer attractive services to new hosts found themselves courted by governments. Argentina’s head of state, Juan Peron, for example, provided ODESSA with 10,000 blank passports to help ease the escape of SS officers from Europe. ODESSA was an organisation which had been established to help the SS after the Soviet Red Army began turning the tide of the Second World War and it became clear that Germany faced defeat. During this period, the Vatican also contributed false passports.

Although knowledge about the Latin American refugees has existed almost since the first escapes took place, the facts were always vague and often based on hearsay and sporadic reports. Estimates of totals numbers were always startlingly varied. The full extent of this influx was clarified in 2012 when secret files held in archives in Chile and Brazil were opened up for inspection by German investigators.

The documents provide evidence of more than 9,000 Nazi war criminals given refuge. This number includes not only Germans, but also Ukrainians, Croatians, western Europeans and others who collaborated with the Nazi regime. Out of this total around 2,000 headed for Brazil, up to 1,000 each for Chile, Uruguay and Paraguay, and the remaining 5,000 or so for Argentina.

Among those better-known fugitives  are some famous names. Adolf Eichmann was an important force behind the “Final Solution” to exterminate the European Jews.  Also among the refugees was the commandant of the Treblinka death camp, Franz Stangl. Another well-known name was the notorious Auschwitz doctor and torturer, Josef Mengele. Yet another was Walter Rauff, an SS man who had devised mobile gas chambers to improve the efficiency of the death-camp killing machine.

Eichmann managed to live a new life in Argentina under an assumed name until the early 1960s, when he was kidnapped by the Israeli secret police, taken to Israel and hanged for war crimes. Mengele lived a secret life, despite occasional rumours leaking into the press, until his 1979 death in Argentina. Rauff escaped to Chile in 1950 and died there in 1984, the Mail Online reports.

One of those who was given access to the documents was a specialist in war crimes investigations, Kurt Schrimm. He claimed that this new source of information was one of the most fruitful they had discovered. Schrimm said it was unlikely that they would learn anything from any fugitives still alive, since any still surviving would be quite old and frail. He pointed out that they still feel obliged to check, nevertheless.

They found that many had traveled under passports of the International Red Cross.  Schrimm and his helper, Uwe Steintz, believe that some fugitives later returned to Germany undetected. They also found that besides the fugitive war criminals many others with secrets to hide emigrated officially under assumed names. For example, some 20,000 Germans emigrated to Brazil during the nineteen-fifties.