The Nazi extermination camp, Sobibór, was located in the modern borders of Poland, in a region which was named Lublin during the German occupation. It was built  in spring of 1942, and was the second center of the Operation Reinhard, the name of the Nazi’s plan to kill all the Jews in German-occupied Poland. It was built along the Chelm-Wldawa railway.

The entire camp, except the main entrance, was surrounded by a minefield of 50 feet wide. This extermination camp was run and guarded by about 20 or 30 SS officials, police and an auxiliary unit of about 90 or 120 men.

The Nazis began with regular gassing operations in May 1942. Most of the people who arrived at Sobibor went, after undressing, a haircut and some other procedures, directly to the gas chamber.

The “lucky” ones, were chosen to work as Sonderkommandos (work units made up of death camp prisoners) in the killing areas. They had to take the bodies from the gas chamber and bury them in mass graves. They also had to look inside the bodies for hidden valuable objects. Some others were chosen to work in more administrative like works. Both groups were short lived, since they knew the truth of what was happening, thus they were periodically murdered and replaced.

During Autumn of 1942 the Sonderkommandos got orders to burn all the bodies from the mass graves in open ovens and crush the bones into powder, the goal was to erase all the evidence of mass murder there. It was in the summer of 1943 when the arrival of people in Sobibór slowed down which was a sign that the camp could be closed soon.

The final clue was a rumor the Sonderkommandos got about the dismantling and total liquidation of the remaining prisoners of Belzec, the first camp of Operation Reinhard. The prisoners in Sobibór sensed the end was near and they had to do something to have any chance of survival.

Leon Feldhendler was the first to think and lead the secret group to make an uprising. The plans started to mature upon the arrival of Lieutenant Aleksandr “Sasha” Aronovich Pechersky to Sobibór from Minsk on September of 1943. Sasha was a trained soviet official and became the main leader of the group.

The plan was to attract the SS officers to the storehouses under false pretext that they would receive new coats and boots, and there they would be attacked with axes and knives, and their weapons stolen. This way, they would be able to kill all the guards, or at least many of them and they would get the chance to escape through the front gate.

After that, everyone would be on their own. The number of people who knew about this plan was kept as small as possible. The escape was planned for October 14th 1943.

First of all they cut all telephone and electricity wires, the SS Guards would not be able to call in reinforcements or notify anybody of the escape.

The first strike was at 16.00 when a number of SS men and Ukrainian guards were killed in the storehouse. But the plan didn’t go as expected as they only managed to kill 11 SS officers and the armory was seized but then the the plan was discovered.

About an hour after that, the entire camp was set ablaze and some were able to flee, though not from the main entrance as it was planed. At the beginning of that day there were 600 prisoners left alive in Sobibór, only half managed to flee.

Some of the insurgents broke open the main gate and escaped from there southwest toward the woods. Another group broke through the fences north of the gate. The first of this group triggered the mines, were wounded and killed, but the others who crossed the area where the mines had already exploded, managed to flee, as they stepped over the bodies of their comrades.

“The noise of rifles, exploding mines, grenades and the chatter of machine guns assaulted the ears,” Blatt wrote. “The Nazis shot from a distance while in our hands were only primitive knives and hatchets.”

Another group of insurgents, headed by Pechorsky, broke through the fences near the SS living quarters, where, as they had correctly assumed, mines had not been laid.

The Nazis send in search squads and killed all the escapees who were caught, however they only started the morning after, which gave some advantage to the escapees.

Those who had remained in the camp were all shot over the next few days, extermination operations were never resumed in the camp.

In the end only about 50 of the escapees lived through the uprising and survived the War. Most of them joined the Partisans, but some were also sheltered by Poles, risking certain death if they were discovered.

Dutch historian Jules Schelvis estimates that 158 inmates perished in the Sobibór revolt, killed by the guards or in the minefield surrounding the camp. A further 107 were murdered either by the SS, Wehrmacht, or Orpo police units pursuing the escapees. Some 53 insurgents died of other causes between the day of the revolt and 8 May 1945. There were 58 known survivors, 48 male and 10 female, from among the Arbeitshäftlinge prisoners performing slave-labour for the daily operation of Sobibór.

Their time in the camp ranged from several weeks to almost two years. A handful of inmates managed to escape while assigned to the Waldkommando felling and preparing of trees for the body disposal pyres.

Within days of the uprising, the SS chief Heinrich Himmler ordered the camp closed, dismantled, and planted with trees. The gas chambers were demolished. Remnants of their foundations were covered with asphalt and made to look like a road. 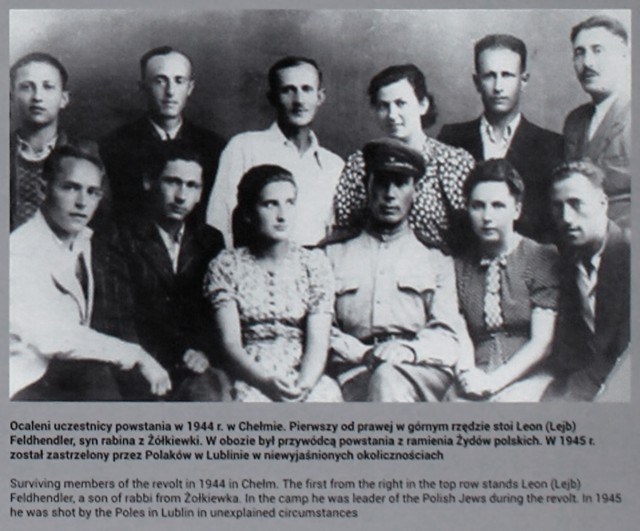 Some Sobibór survivors were spared the gas chambers because they were transferred to slave-labour camps in the Lublin reservation. Estimates for the number of people sent away from Sobibór range up to several thousand, of whom most perished before the end of the Nazi regime.

The total number of people in this group include 16 known survivors (13 women and 3 men) from among the 34,313 Jews deported to Sobibór from the Netherlands.

Leon, one of the leaders of the uprising, managed to escape and lived as a Partisan. But was killed shortly after the war was over in Lublin by local anti-semites. Sasha also survived and joined the Partisans, and later the Red Army.

Nowadays there’s a museum on the former camp grounds. A large pyramid with the ashes and crushed bones that were collected from the cremation pits stands as a reminder of the horrors of the camp.