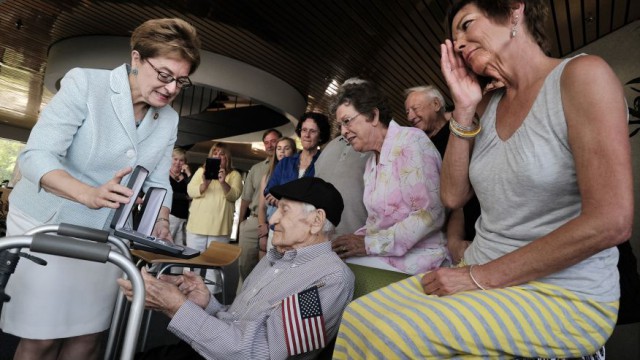 A World War Two veteran has been awarded the Silver and Bronze Stars for his service during the war, 70 years after the war has ended.

Private Horace Appleby, who is now 101 years of age and from Toledo in Ohio, was last week awarded both the Silver and Bronze Stars for his bravery in saving a comrade on the battlefield.

In January 1945, Horace was serving in Europe along with thousands of other US and Allied troops. He served with the Company E, 180th Infantry Regiment. The regiment was making its way across Europe and was pushing back Germans.

At one day they had to retreat because of a massive attack by German forces. During their retreat, Horace noticed that one of their men was missing so without thinking of his own safety he ran back into enemy fire in order to bring the soldier back into his regiment. Luckily both Horace and his comrade were unhurt. Military records documented the situation, but at the time Horace was not recognised for his bravery.

It wasn’t until more recently that Horace was retelling the story to his niece that she became interested in his story and began looking into military records and researching what happened.  She uncovered the story and was so enthralled by what her uncle had done that she shared the story with her local state senator who took up the baton for Horace to be awarded for his bravery.

Horace was just 27 at the time of the incident, but he says that he didn’t think twice about it and just did what he had to do.

Military officials said that they were glad to be able to pay tribute to such a brave World War Two veteran and for someone who sacrificed so much for the freedom of others.

Horace was awarded not just the Silver and Bronze Stars but also a myriad of other medals to mark and honor his bravery, the Fox News reports.

Horace said that while he survived the incident he says the mental scars of the war have remained his entire life. He says the worst experience was when he and his regiment arrived at Dachau and found the concentration camp. Horace says that the prisoners were in a terrible state, they were sick, diseased and starved. He remembers how the soldiers gave up their rations in order to give the prisoners food to eat.