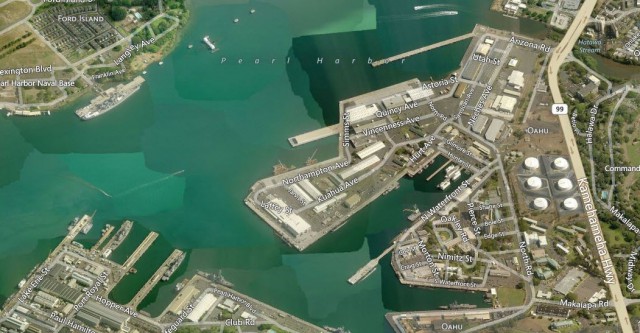 Pearl Harbor, well known for its place in World War Two history books,  is in the news once again, but this time for inglorious reasons. Ever since the War, the United States has continued to operate a naval base there, and slowly the levels of land-based waste have built up into a potential environmental disaster.

The USA has had a presence at Pearl Harbor since long before Hawaii became one of the “United States”. Hawaii is an archipelago in mid-Pacific Ocean. The island group was annexed by the USA in 1898, but even before that, it had long been used as a staging post for American ships trading across the Ocean. Ships from the USA had found safe harbour in a sheltered lagoon on the Hawaiian island of Oahu.

There followed a period of appropriation of land from the Hawaiian people, expansion of the harbor and development of infrastructure at the base. Eventually, in the years following annexation, the USA dredged and deepened the lagoon and built a full-scale deep-water naval base there. They called it Naval Station Pearl Harbor, after the Hawaiian name for the lagoon, “Wai Momi”, which means “Waters of Pearl”.

Pearl Harbor was to become the headquarters of the US Pacific Fleet, and the name “Pearl Harbor” was to become firmly established in the history of World War Two, when Japanese bombers and torpedo planes struck the naval base on 7th December 1941. Until this point, the USA had maintained a neutral position in the two-year-old war and had remained unaffected by it, but the US government immediately declared war on Japan, after which Nazi Germany declared war on the USA, thereby aligning with the Allies in their fight against fascism.

Following the end of the War, the US navy continued to build and strengthen its presence at the island base. Eventually the land and water extent of the base reached 12,600 acres (5100 hectares).

The waters of the harbour had been full of life, ecologically rich and productive, but gradually the day-to-day activity, building work, dredging, shipping traffic, erosion and pollution associated with the base have taken their toll on the natural environment.

In 1992, the US government body charged with protecting the environment, the Environmental Protection Agency, placed the base on a “National Priority List of Hazardous Waste Sites” as an indication of how concerned they were about potential harm to the environment and people from waste material at the site. By 1998, the situation was worse, and the Hawaii Dept of Health advised people not to eat fish or shellfish from the waters of Pearl Harbor.

There are more than 700 contaminated sites that have been identified at the base. One of the most serious is an underground contamination by bunker oil, seeping into the ground from a tanker farm, where fuel for shipping, warfare and other uses is stored. It has fanned out underground to form an enormous plume.

The leak has been known about for a long time, going back to the war years, but no one has taken action to stem it. The Navy, Health Dept and EPA have been keeping a watch on it since 1983. It has now reached about 20 acres in extent.

It will cost many millions of US dollars to repair the leaks and decontaminate the polluted water table rocks, between 5 and 40 feet below the surface. Many pipes and wires have been laid over the affected area. The pollution plume is said to be stable and a navy spokesman said that he thinks it won’t enter the sea or pollute the island’s drinking water, The Huffington Post reports.

Despite assurances, local people are worried about toxic effects of the ground pollution and the hazard it poses. If the plume became unstable and threatened to contaminate the groundwater or the sea, there would have to be an urgent response by the authorities.

Environmental activists have spoken out about the dangers. The head of EnviroWatch, Carroll Cox, calls it the most serious environmental problem on the island.  Speaking for another NGO, Hawaii Peace & Justice, Kyle Kajihiro, questioned how a danger so grave could have been “hidden in plain sight” and called for a major decontamination operation.

Others have used the growing awareness to draw attention to other environmental hazards associated with the naval base. For example, Marti Townsend, the head of the local Sierra Club branch, mentioned the case of a huge leak of aircraft fuel at a nearby storage depot. She said it was one of very many leakage incidents since the war. She said it was mindboggling how much contamination there was associated with the military. A navy official admitted that even as recently as 2007, a huge spillage of 360,000 gallons of diesel was added to the existing underground oil plume. They had managed to recover only a small amount of it, using wells drilled into the ground.