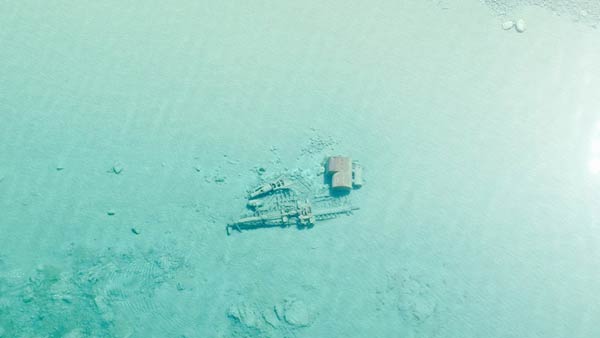 Fascinating photos from the US Coast Guard after post-winter ice depict several 19th and early 20th century shipwrecks. However, of the five shipwrecks photographed, only two have been identified. Located in Lake Michigan in the US state of Michigan and near the Sleeping Bear Dunes National Lakeshore, numerous shipwrecks have occurred over the years. While many are located in varying levels of water, the US Park Service, which manages the Sleeping Bear Dunes National Lakeshore, noted that several shipwrecks are occasionally visible. [Via]

This is primarily because of not only the clear waters of Lake Michigan but also thanks to beach erosion, wind, waves and fluctuating lake levels. However, while residents and tourists alike can often view these shipwrecks, the ruins are considered public property and cannot be disturbed.

Among the photographed shipwrecks includes the 121-foot brig, the James McBride, which ran aground in 1857 after running into a gale. While not much is known about this wreck, it is thought that it was first to carry cargo from the Atlantic Ocean to Lake Michigan in 1848, the MSN reports.

The Rising Sun which sank in 1917 was the second shipwreck to be identified and photographed by the US Coast Guard. According to the Coast Guard, this ship was a 133 foot long wooden steamer. Its final voyage carried members of the religious group the House of David and among its cargo included Three thousand bushels of potatoes and forty thousand feet of lumber. A sudden snowstorm occurred and drove the steamer ship off course resulting in it hitting rocks. As water entered the ship, high winds further battered the ship. Despite the loss of the ship, there were no casualties.

Among shipwreck in this area includes the Jennie & Annie. Built in 1863, the Jennie & Annie was grounded in 1872 due to stormy conditions. Six or seven of the 10-man crew perished with the wreck. Every few years, this wreck is visible.

According to the Michigan Department of Environmental Quality, an estimated 6,000 vessels have been lost on the Great Lakes with about 1,500 of these ships located in Lake Michigan waters. Little if anything is known about many of these vessels but because of the thriving lumber industry in this region, many vessels took part in this industry and as a result, Lake Michigan as well as the other Great Lakes became an active shipping route.