A rusty but well-preserved World War Two tank was recovered in 2014 in the Barents Sea after having been discovered amongst the wreck of a US cargo ship.  The ship was sunk by a German submarine in the last days of World War II. It spent nearly 70 years on the bottom of the sea before finally being recovered.

The tank, an American M4 Sherman, was being transported on the USS Thomas Donaldson when the ship was hit by a German torpedo launched from the U-boat U-968. The cargo ship, which was travelling in the Arctic convoy JW65, sunk close to the shores of Kildin Island on March 20th, 1945.

The Thomas Donaldson was transporting 7679 tons of cargo when it was sunk, including tanks, 6000 tons of ammunition, and assorted other vehicles. 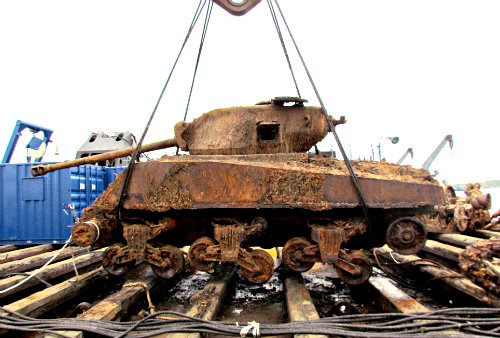 A German torpedo hit the engine room directly but, despite its haul of dangerous cargo, only 3 people died when the ship was hit – one officer and two crew members who were below deck at the time.

With the engines destroyed and the threat of the flammable ammunition, the captain of the ship ordered all 8 officers, 34 crewmen, and 27 armed guards into life-boats, while he himself remained behind, the Mail Online reports.

The ship was destroyed, but it was not sinking yet. The captain hoped to wait for a rescue ship to tow them back to port, but before that could happen the Thomas Donaldson sank stern-first into the sea only half a mile from the shores of Kilden Island, near the Russian city of Murmansk.

On July 23, 2014 the cargo ship was discovered by divers at only 55 metres deep. The divers report that there are two other tanks on board the wreck which will be salvaged.

Some more pictures of the M4A2(76)W Sherman during and after the recovery.

The first images of the Sherman while still on the bottom of the sea. Back above the water for the first time in 7 decades! An amazing picture from the interior of the tank, the gun is clearly visible. Moving to the next destination for preservation, the Sherman is being lifted on a low loader.