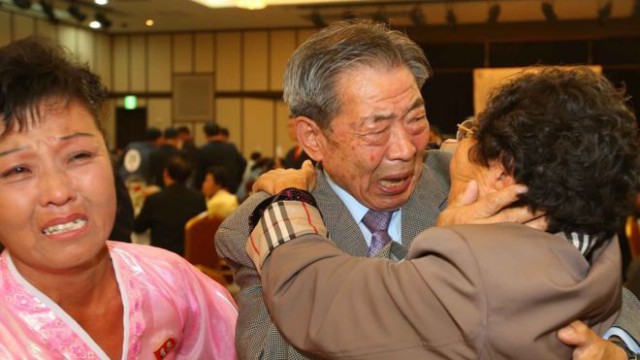 The war between North Korea and South Korea stopped in 1953. Thousands of families were torn apart when a border was drawn between the two countries. Depending on the state of the current relationship between the countries, reunions have occasionally been organized since 1988 to bring together separated families.

One such week-long reunion is being held at Mount Kumgang resort, which is located at the border. Most of the participants would be seeing their long-lost family members for the first time in almost fifty years!

Tempers were running high in August between North Korea and South Korea after two South Korean soldiers were hurt in an explosion on the border. However, an agreement was reached to de-escalate tensions, and this reunion is the direct result of that agreement.

The reunion is being organized by the Red Cross. Thousands are people had signed up, but only a few people on each side of the border were ultimately selected. The selection process in South Korea includes computer selection, which considers the participants’ ages and family background. The chosen participants also have to undergo an interview process and medical check-ups before they are allowed to attend the reunion, the BBC News reports.

Lee Taek-gu, 89, is one such lucky participant. He is looking forward to seeing his sister. Mr. Taek-gu had fled south when his sister was only a little girl. He had intended to return home after the war, not knowing that it would take him more than fifty years to see his sister again. To deal with his grief, Mr. Taek-gu had taken to writing letters to his family, knowing that he would not be able to send them as there is no postal service between the two countries.

Today, Mr. Taek-gu is dressed up for the occasion and looks forward to sharing the memories of his parents with his sister. Most importantly, he just wants to thank her for being alive, thus making this meeting possible.