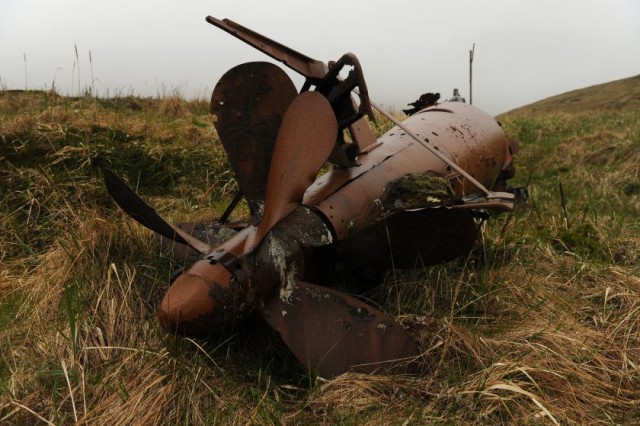 Stretching in an arc across the far northern Pacific Ocean, from Alaska in the east to Kamchatka in the west, and demarcating the Bering Sea to the north, lies a chain of volcanic islands called the Aleutians. They belong in part to Russia but mostly to Alaska. Some of the islands are quite large and populated, while many others are tiny and uninhabited.

Members of the USA Fish and Wildlife Service from their research ship called “Tiglax” visited the Aleutian island of Kiska in June 2015 to investigate the rusting hulk of a Japanese midget submarine left lying in the grass of the island since the Second World War. During the war, the Japanese occupied some of the islands in the chain, including Kiska, where the USA had stationed some naval staff to monitor the weather station. The Japanese hoped to impede the movement of US forces across the northern Pacific Ocean.

The submarine left on Kiska is an A-type midget, 78 feet long. Its shape is unusual in resembling an orca or killer whale. The Japanese had transported six such subs to the island in July 1942. Similar midget submarines were used in the Pearl Harbor attack further south. The submarines moved to Kiska were actually sent there when their intended destination, the Midway Atoll, was lost to the USA.

From time to time, scientists and archaeologists spend time on Kiska and other Aleutian islands to document the fauna, flora and historical artefacts there. One archaeologist, Debra Corbett, lived on the island for several weeks in 2014. She and Richard Galloway, another researcher on the island, described the submarine on the website of the Aleutian Island Research Group, which brings together researchers who focus on the island chain. 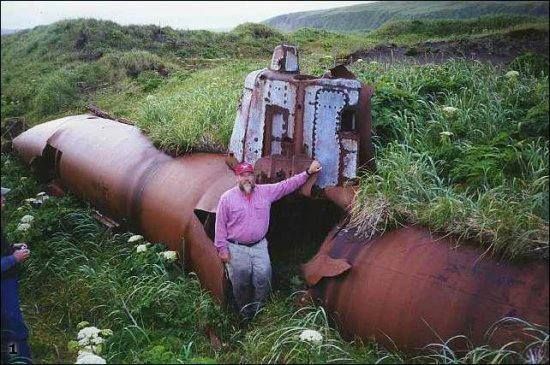 Corbett described how claustrophobic it must have been for the men who crewed these tiny subs. A pair of men would just manage to squeeze into the space. War historians have even likened the sub to a torpedo, so it was like a large torpedo which could fire a smaller one. It is possible for visitor to the island to squeeze into the rusty submarine to get a sense of how it must have felt to the Japanese crew.

There is a lot of other evidence left behind on Kiska by the Japanese. Where the hulk of the submarine is lying, there is a rail structure, which would have been used to help guide the submarines in and out of the water. There are some sheds which were used to conceal the subs. There is an underground hospital.  Corbett points out that the Japanese defences were quite substantial, with anti-aircraft batteries in the valleys. There was also a seaplane base. In the end, the Japanese stayed for only fourteen months, but these structures show that they had intended to stay longer, the Alaska Dispatch News reports.

The USA re-occupied the island in August 1943. They expected resistance but discovered that the Japanese had slipped away. They had used explosive charges to render the submarines unusable before they left. Eventually all but one of the six were destroyed or sunk in the island’s small harbour. Galloway has written that the cold subarctic climate of the Aleutians has slowed corrosion of the metal objects, but eventually even this last submarine will rust entirely away.