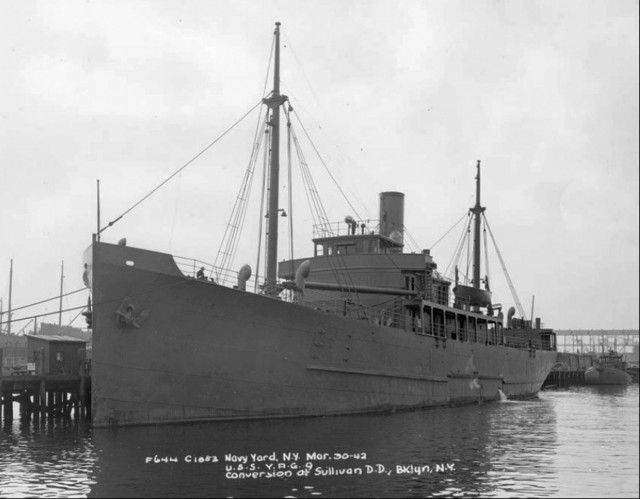 Accurate weather information for those who planned and flew bombing missions during the Second World War was crucial. Bad weather could obscure the target, and put the lives of aircrews at risk.  Decisions as to whether a mission went ahead or was postponed, depended on the civilian meteorologists who worked with military planners on a daily basis.

Meteorologists were to be found on almost all USAAF bases, and in other locations, too. There were many meteorologists stationed on weather ships in the Pacific and North Atlantic oceans.

The use of weather ships had begun in 1939, when US Coastguard vessels were deployed, following the loss of a Pan Am World Airways transatlantic flight.  By early 1941 there were five US Coastguard cutters in use, and by 1942 these vessels had been replaced by six cargo ships.

One of these ships, a freighter, was bought by the US Navy in December 1941 and converted for use as a weather ship. Originally named the ‘Cornish’, she was renamed Muskeget in May 1942.  In June the same year, the ship was assigned to the US Coastguard service as a North Atlantic weather patrol vessel. Muskeget carried a complement of nine officers, one hundred and seven enlisted men, one US Public health officer and four US weather service civilians.

On 30 June 1942, the Navy transferred Muskeget to the United States Coast Guard for service as a weather ship. Commissioned into the Coast Guard as USCGC Muskeget on 1 July 1942, she was assigned Boston, Massachusetts, as her home port and to duty with the North Atlantic Weather Patrol. Meteorologists used weather balloons launched from her deck to gather data on pressure, winds, temperatures, and humidity to support weather forecasts in support of Allied military operations.

Muskeget departed Boston on 6 July 1942 for her first weather patrol, which took place at Weather Station No. 2 in the North Atlantic Ocean off the southern tip of Greenland. She concluded this patrol on 27 July 1942.

On 24 August 1942, Muskeget departed Boston for her second weather patrol, again at Weather Station No. 2. She issued the first weather report of her patrol on 28 August and arrived on station on 31 August. After she issued a weather report on 9 September 1942, Allied forces did not see or hear from her again.

At 14:54 hours on 9 September 1942, the German Navy submarine U-755, operating as part of a wolfpack, sighted Muskeget emerging from a rain squall in a heavy swell about 400 nautical miles east of Newfoundland and identified her as an auxiliary merchant cruiser. U-755, commanded by Kapitänleutnant Walter Göing, fired two torpedoes, heard the sounds of Muskeget‍ ‘ s boilers exploding and bulkheads collapsing as she sank, then surfaced and found a life raft and survivors in the water, but little wreckage. U-755 departed the area but returned a few hours later to find a large oil slick and two life rafts tied together with eight men on them. As they shouted at U-755, Göing thought he heard them say that they were from an American ship named Muskogee, Mukited, or something similar. U-755 then again departed the area.

When Muskeget was overdue in returning to Boston later in September 1942, she was presumed lost with her entire crew. Monomoy concluded her weather patrol on 1 October 1942 and, upon arrival at Boston on 12 October, reported 20 to 35 German submarines operating within striking range of the weather station, shadowing the two or more Allied convoys that passed through the area in which Weather Station No. 2 was located each day.

No bodies were ever recovered, and Muskeget’s wreck was never found. On 10 September 1943, the U.S. Navy and U.S. Coast Guard officially declared all on board Muskeget to have been killed in action, and on 26 October 1943 she was struck from the Navy List. Only later did it become known that U-755 had sunk her.

Muskeget was the only U.S. weather ship lost during World War II.

Seventy-five years after losing their lives in the service of their country, and for the first time in the US weather service’s history, the four weathermen who served on USS Muskeget have now be posthumously honoured. Luther Brady, Lester Fodor, George Kubach and Edwin Weber have been awarded the Purple Heart at a ceremony in Washington DC on 19th November 2015.