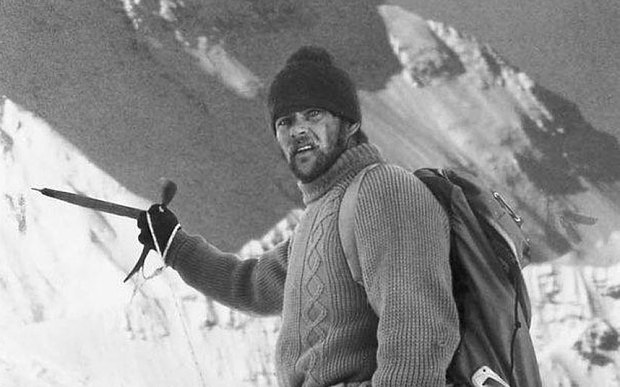 John ‘Brummie’ Stokes was both a gentleman and a man’s man.  He was born in 1945 in the village of Hamstead near Birmingham.  His parents were solid folk, with his father working in a factory and his mother tending the home fires.  His childhood was fraught with run-ins with the law for nefarious activities and, having come to the attention of the judicial authorities, he was eventually told to join the military before he ended up in serious trouble.

So at the age of 17, he joined the military, ending up in the Royal Green Jackets, an infantry regiment where he served for three years.  After several attempts, he eventually succeeded in joining the SAS, and he served this regiment with great distinction for the next 23 years.

While on one of his Sunday School outings he climbed Mount Snowdon and immediately a love of climbing was born.  This led him to meet a lifelong friend, Bronco Lane, and together they undertook many climbs, including Mount Everest.  The first major climb the two men did together was while with the SAS; they joined an expedition to climb the 25,8500 foot Mt. Nuptse.  This expedition took place in 1975 and this mountain, a close neighbor of Everest, claimed the lives of four of his climbing party.

Undeterred by this tragedy, John, and Bronco both jumped at the chance when they were offered places on a climb of Everest. On May 14 1976, Bronco and Brummie found themselves at Camp 6 on the slopes of Everest and ready to climb the southwest face the following morning.   In spite of a severe storm that blew up overnight, both men were determined to continue the climb, and the next morning they set off as planned.

They reached the summit by mid-afternoon but the conditions were horrendous, and the snow was swirling around as they were buffeted by winds.  They immediately set off to descend, but on their way down the storm intensified and they were left unable to see anything due to white-out conditions. There was no alternative but to make an improvised camp for the night and see if the morning brought better conditions.

They scraped a foxhole in the snow and bunkered down for an extremely uncomfortable night.  The temperature dropped to minus 20˚ centigrade and the wind added to the chill factor.  They took turns in hitting each other to ensure neither went to sleep, fearing that if they did they would not wake up.  Brummie’s vision was fading due to snow blindness and he could not open the tap on their last canister of oxygen.  Bronco took off his mitten to open the tap, thereby saving their lives, but his fingers suffered frostbite and eventually they had to be amputated.  Both men also lost their toes to frostbite.

The next morning as they were struggling to make their way down the mountain, they met the next two of their party making their way up.  It was an emotional meeting as the rest of their party had feared the worst, expecting to find two bodies.  After this climb it took both men many months to learn to walk, run, and jump on feet without toes. But achieve this they did, through sheer determination.  In fact, Brummie recovered so successfully he took part in the Falklands War after he had completed his rehabilitation.

In 1983 he climbed Mount McKinley in Alaska in preparation for another attempt at Mt. Everest, planned for 1984.  The team was ready at its advanced base camp when an avalanche buried the camp, killing one member of the team and leaving Brummie with a broken neck.  This injury almost paralyzed him and again he was in rehab for a climbing injury.

He resigned from the army and approached the Chinese Government for permission to climb the northeast ridge of Mt. Everest – this was the only route not yet conquered by anyone.  Stokes attempted the climb with a team of climbers made up of ex-SAS members and top civilian climbers.  Sadly, this attempt was abandoned at 26,000 feet due to high winds.  In 1988, Brummie was with two climbers, Russell Brice and Harry Taylor, who made it across the hitherto unclimbed Three Pinnacles; sadly, without their team leader. Brummie had suffered a cerebral edema and had been airlifted back home.

This was the last attempt Stokes made on Mt. Everest, and instead of climbing mountains he embarked on a new project to provide activity days for underprivileged children, people with physical and mental disadvantages, and the elderly.  Brummie’s compassion and love for humanity came to the fore, and his Taste for Adventure Centre at Credenhill in Herefordshire became his passion.

In 1988 Brummie also wrote and published a book, Soldiers and Sherpas: A Taste for Adventure, in which the founder of the SAS, David Sterling, summed up Brummie’s character perfectly by writing in the foreword that Brummie had courage, loyalty to his companions, and moral guts.