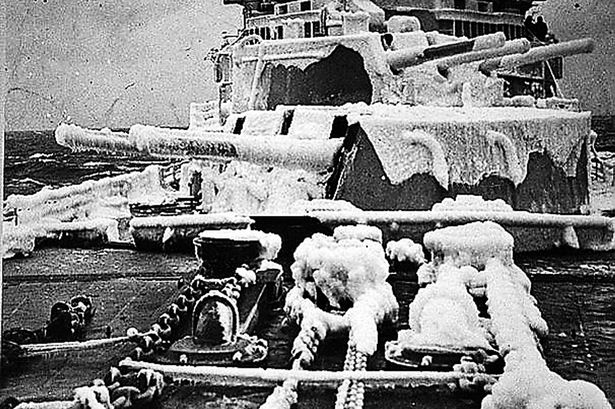 Russia continues to honor the Allied Sailors who risked their lives and took part in the Arctic Convoys during World War Two.

Ever since World War Two ended in 1945, Russia has sought to award those sailors from Allied forces and the merchant navy who sailed back and forth via the freezing Arctic seas to deliver vital supplies to Russia.

One veteran who recently received the special Arctic Convoy medal is 96 year old Douglas Sayles from Heighington in County Durham.

The medal was delivered direct from the office of Russian President, Vladimir Putin, and was sent with a letter commending Douglas for the service, heroism and support he and his fellow crewmen gave throughout the war, contributing to the defeat of the Third Reich.

When Douglas served in the convoys he was just a young sailor serving in the British Royal Navy, yet he had to sail the Arctic seas many times tackling dangerous situations with both the enemy and the extreme weather conditions, The Northern Echo reports.

Now Douglas says that he hopes the younger and future generations understand the horrors of war. He believes the medal from Russia may be a sign of better understanding between nations, but that receiving the medal has brought back many memories that he had long forgotten.

Douglas says that he didn’t speak about the war much once it had ended, but has spoken of his experiences more recently. He remembers being both bombed from the air and torpedoed from the sea by the Germans whilst aboard his shop and simply can’t understand how he even survived the constant attacks.

Douglas says that he saw thousands of men killed during his service and in his mind’s eye still sees them now. Many ships he served on were sunk, but each time Douglas managed to escape.

Douglas now says that he is sad and finds it difficult to see the news which tells of conflict and war still happening today. He believes that nothing was learned from the tragedy of World War Two.

Douglas received a total of 12 medals for his service during the war, including for service in North Africa, Malta and for helping fleeing Jews who were leaving Germany and heading to Palestine throughout the war.