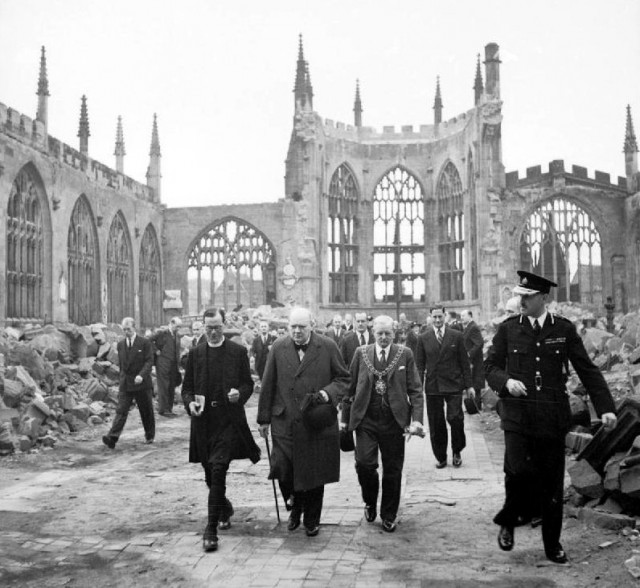 In the industrial midlands of England, close to Birmingham, lies the city of Coventry. Early in the Second World War, Coventry fell victim to a particularly intensive Luftwaffe bombing raid which wreaked havoc on an extensive area of the city centre, including its ancient cathedral.

The Blitz had begun in the summer of 1940, with German bombers of the Luftwaffe were deployed in raids against British dockyards, industries and city infrastructure. These bombing raids were meant to break the will of the British people and government to oppose Hitler’s advance across Europe and even as a prelude to full-scale invasion of Britain by Nazi forces.

Coventry was one of the cities which were targeted, suffering several bombing raids from August to October 1940. These caused isolated damage and left some 200 people dead. However, devastation struck on the evening of 14th November. By the end of the raid at midnight, incendiary and high-explosive bombs dropped across the city had destroyed most of the city centre, a third of the city’s factories, hospitals, offices and about 5000 houses. The air raid shelters mostly survived, so most of the 33,000 people taking shelter survived, many others had hurriedly left the city in the evening. This kept the mortality remarkably low for such a destructive bombing raid, with over 600 citizens being killed and several hundred others missing, as well as thousands injured.

Following this attack on Coventry, the British government changed their own bombing strategy from  precision bombing of narrowly selected German targets to one of mass area bombing of industrial areas and city districts.

For a long time after the end of the war, rumours circulated that claimed that at least some members of the British government, including the war-time prime minister, Winston Churchill, as well as some in the military leadership, knew in advance that Coventry was to be attacked by Luftwaffe bombers, and chose to keep quiet about it. This reached a climax in a book written in 1974 by F. W. Winterbotham, a war historian who had worked in the RAF on  the top-secret Ultra mission, which used information obtained by breaking German codes. He claimed that the Coventry raid had been discovered in advance by decoders working on cracking the top-secret Enigma code. The author claimed that Churchill made the order not to prevent the attack or even to strengthen the city’s defences, otherwise the Germans may have suspected that the British had cracked their code.

However, other historians and former military decoders refuted this claim, saying that the exact details about the raid could not be decided in time, and that only vague information about a coming raid was known. Churchill had gone to London that evening, because that’s where they suspected there would be a raid.

Recently a well-known historian, author and graduate of Oxford University, Frederick Taylor, published a book about the subject, called “Coventry – Thursday 14 November 1940” in which he examines the events leading up to that fateful night in great detail.  His opinion is that the British government could not have known beforehand about the blitz on Coventry. He says that even if that had managed to pinpoint the target for that night, there would not have been enough time to carry out any major evacuation or put additional defences in place.

In Taylor’s opinion, the city was simply inadequately defended and unprepared for such a concentrated attack, which came in repeated waves of German bombers over several hours. In addition, he points out, Coventry had been an highly important manufacturing hub for the war effort, so it is unlikely that such a great sacrifice would have been deliberately made, the Coventry Telegraph reports.

Taylor sympathises with the shock and sadness people must have felt afterwards, and says he can therefore understand why rumours of foreknowledge would have been spread, as people cast around for someone to blame for their losses.