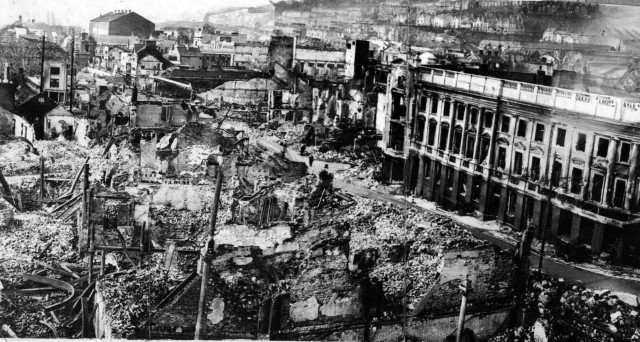 February 19–21, 1941, marked the darkest days in Swansea’s history. From as far as Cornwell and Devon you could see the city burning as it fell victim to Hitler’s attempt to bomb Britain into total submission. The Germans decimated Swansea with 30,000 incendiary and 800 high explosive bombs across three relentless nights of attack.

The three-day blitz left tremendous physical damage, destroying 850 properties and 11,000 buildings. But the effects of the human toll it took were far greater. A total of 230 people were killed and an additional 409 injured during the most sustained air bombardment of World War II in Wales.

Now it has been 75 years since this attack, and the city is preparing an array of events to remember the time when the Luftwaffe attempted to bring Swansea to its knees, but failed. The Swansea Museum will show a film this Saturday documenting the events that took place over the course of those three days, alongside interviews with survivors.

The attacks wiped out old streets forever, according to museum education officer Barry Hughes who helped put the film together. It really was a colossal event in history. The heart of the town, or the “old core,” was lost in that bombardment, including some iconic buildings such as St. Mary’s church, the Ben Evans department store, and the Victorian market, but it is amazing to consider how the city has been revived after the attacks..

The port area and the oil refinery were located just beyond the main targets of the Luftwaffe. The German  objectives had been to hinder coal exports and devastate the town, which for years had been located at the center of the metal industries.

Richard Burton was a teenager at the time of the attack, and documented the experience in his diary. He describes watching the “burning” of Swansea in utter awe from his home in nearby Port Talbot.

Much of the town center had been destroyed, but fortunately some of the older buildings survived, such as the castle, museum, and the Glynn Vivian Art Gallery. The people of Swansea demonstrated resilience and fortitude, uniting to ensure the Nazi terror did not break their resistance. It is amazing how the adults during that time had the ability to make the children feel like everything would be okay.

Swansea’s Grand Theatre is staging a play for its participation in commemoration of the Blitz. The play is called Swansea’s Three-Night Blitz and runs from Wednesday to Saturday. The writer, Manon Eames, said the play is written from the perspective of Elsie, a Swansea shop worker, and her family. Elsie is in the midst of planning her wedding with her soldier boyfriend Tommy just prior to the start of the attacks. At a talk last month Eames shared that she was amazed by the closeness of the people to one another and the relentless “beating heart” of the town. The ordinary lives and simple details were all swept up in the enormity of the war.

St. Mary’s Church was rebuilt in the 1950s and will stage a concert on Saturday. The event will feature the Morriston Orpheus Choir and the Siren Sisters performing music from the time of the war. In addition the city’s 1940s museum will send three staffers in costumes to add color to the concert.

The council education department in Swansea has encouraged children to write poems about the attacks. Selected poems will be read aloud at the concert. West Glamorgan Archive Service will hold an exhibition in the Civic Centre as another commemoration of the attacks.

One of the best stories to emerge from the tragic events of Swansea is that of Elaine Kidwell. At the time, she was a 17-year-old library assistant who led a remarkable life helping save her beloved town from the Nazi siege. Many rushed to find underground shelter, but not Elaine. She remained above ground as one of the youngest air-raid wardens in Britain. Just a few years ago she published a memoir describing her work during the Blitz.

Kidwell described the three-day bombardment as horrendous. It was three nights of rescuing people, getting them to shelters, and administering aid. When she went into the shelters, she was the people’s only link to the outside; she knew she had to remain smiling.

She describes one man who was found screaming on the top floor of his home after it was directly hit. The smoke had cleared and he was clearly terrified. They asked him where the last place was that he had seen his wife, and he pointed to a giant pile of rubble. Kidwell stood with him until the rescue squad arrived. Miraculously,  it turned out his wife was underneath a solid Welsh table completely unharmed. For Kidwell, that was a particular moment of relief during a time when moments like that were hard to come by.

The history of the raids of bombing has many other inspiring stories.