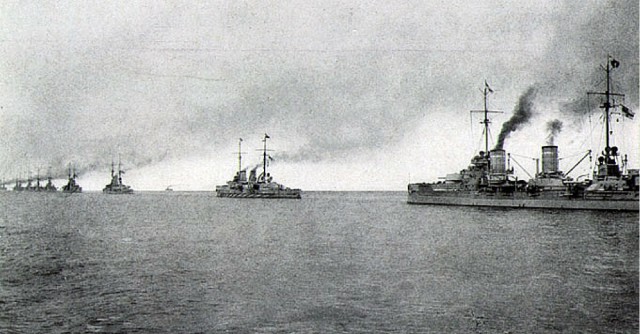 Very rarely one witnesses the event like the one that is planned by the British and German Naval authorities to be held next year. Warships from Britain and Germany will lay wreath in commemoration of the fallen soldiers from the both sides in the famous of Battle of Jutland. 2,500 Germans and 6,000 British sailors perished in the clash that took place in 1916 during the First World War.

The Ceremony will take place on 31st May 2016 off Danish coast near Jutland bank as commemoration to the centenary of the famous Battle. The ceremony will kick start a series of events remembering the events and fallen soldiers of the battle in Germany and United Kingdom. In the UK, a commemorative service will take place at the famous St Magnus Cathedral in Kirkwall on Orkney. There are preparations to lay down paving stones to pay tributes to four recipients of the Victoria Cross from the Battle of Jutland. In Germany, however a variety of different events are being planned. Quiet a few ceremonies will be held in Wilhelmshaven, known as the home to the German High Seas Fleet , part of the Imperial German Battle Fleet.

Earlier on in the First World War, German war tactics heavily relied on the, effective and safe, coded communication that enabled them to ambush allied convoys and wreck havoc on British shipping. British code breakers painstakingly broke through German codes and its mechanism and soon managed to crack the code. The very first piece of information that Royal Navy commanders received was the presence of German Warships off the Danish shores. Britain saw this as an opportunity to gain the upper hand over German Navy by ambushing German warships, giving Germans the taste of their own medicine. British fleets anchored at the natural harbors of Orkney Islands and caught the German off guard some seventy miles off Danish shores. The battle involved more then 100,000 men on both sides on board 250 ships and continued for three days. Britain quickly faced a set back when two of its more reliable warships sank killing 2,200 sailors. By the end of the battle German fleet took advantage of the dark and managed to escape, quickly proclaiming victory over Britain.

Despite the fact that Germany always maintained victory in the Battle of Jutland, in reality it was the victory for Britain. After retreating from the battle, German campaign in the waters surrounding Britain fundamentally shifted from an open ambush strategy to more of stealth bombing missions using U-boats, The Guardian reports.

For Royal Navy, the Battle of Jutland was a success because it upheld British honour and superiority over waters restricting Germany to a very small operational patch of water. Although U boats were still very damaging to the convoys and quiet effective in ambushing, but deploying an adequate convoy method rendered U boats ineffective and some actually got destroyed while trying to stage an ambush on trade convoys.

British government is spending £50m towards commemoration of the centenary of WW1 across the country. A significant amount is being spent in generating interests among pupils and young adults, about the events of the First World War and its historic significance.