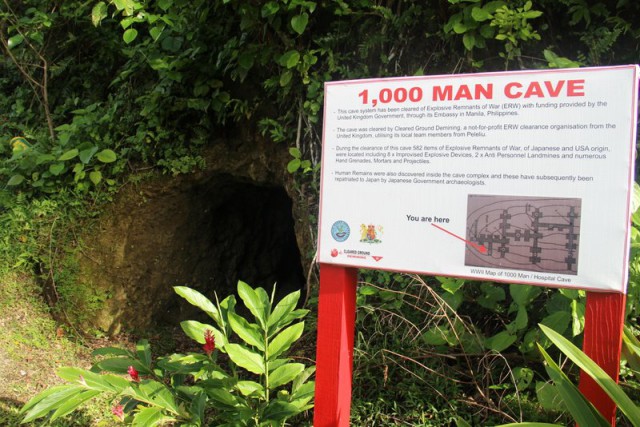 On the tiny Pacific island of Palau, the remains World War Two soldiers are still being searched for.

Seventy years since the end of World War Two, the small Pacific island of Palau bears the hidden remains of hundreds of soldiers, both Allied and Japanese.

The Bentprop Project is a non-governmental organisation which is based on the island and is trying to excavate, identify and return the remains of as many World War Two soldiers as it can.

There are said to be around 80 unaccounted US soldiers who never returned from the island after the battle there at the end of 1944.

The excavations and retrieval of World War Two remains has become a regular part of life in Palau.

At the time, the island was known as Peleliu and is part of a group of small islands off the east coast of the Philippines. The islands had been occupied by the Japanese during the war, and the US military saw the islands as a strategic location which had to be invaded and taken over so that it could continue its northward advance to the Japanese mainland.

By mid-1944, the US had made its way across the southwest and central Pacific bringing the frontline ever closer to the Japanese mainland.

There were two strategies being considered. One was by General Douglas MacArthur who wanted to continue westwards and capture of the Philippines, Okinawa, and then the Japanese mainland itself. Whereas US Admiral Chester Nimitz wanted to skip the Philippines, take Okinawa and Taiwan and then attack the Japanese mainland. Nevertheless, both wanted to take the island of Peleliu, since it was the next set of land that the US could launch an air attack from.

The US 1st Marine Division was to make the invasion and President Roosevelt personally went to Pearl Harbor to meet the troop commanders to discuss their strategies. It was decided that MacArthur’s strategy would be used to continue the US advancement.

There were around 11,000 Japanese troops from the 14th Infantry Division of the Japanese Imperial Army based on the island. Colonel Kunio Nakagawa, who was the commander of the Division’s 2nd Regiment, commanded the defence of the island, the Radio Australia reports.

In total, US troops suffered more than 6,500 casualties during the four week assault on the island.