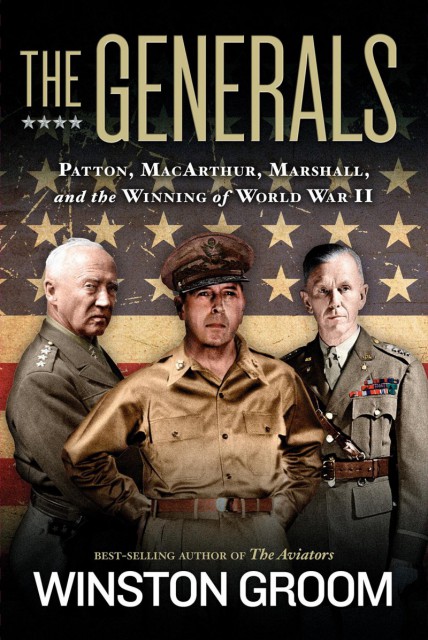 Many know the movie Forrest Gump, but most don’t realize that it started out as a novel. The author, Winston Groom, recently had an interview that discusses his newest book, The Generals, which focuses on the nonfiction lives of three men.  Groom writes about the three generals’ years in the military and their war stories.

What many critics found interesting about the book is that each man’s personality is so different from the others; all have different perspectives on life leading up to the war and is aftermarth, as all have divergent personalities and characteristics.

Groom loved reading anything and everything that had to do with war when he was younger.  He especially wants to thank Jim Jones for helping him with working on his writing style to make his novels better.  Jones contributed to making sure Groom learned these tactics faster so he could write most productively.

Groom’s earlier novels generally had one main character, but in the newest one he presents three main characters in three different zones during the wars.  What is also different in this book is that the three men are real persons instead of Groom’s fictional characters in his earlier works.  In his research, Groom grew to like each of the three characters for their specific traits, and in his writing he crafts the book so that the reader feels the same.

In one part of the book Groom writes about Charles Lindbergh, who was an isolationist before the war and because of that was not trusted by Roosevelt.  To his disappointment, he was assigned to Detroit for half of the war, testing airplanes.  Groom describes how Lindbergh asked Henry Ford to intervene with the President so that Lindbergh could be in active service, testing the planes in combat.  The fact that he did is not generally known – Grooms said that Lindbergh went on about 50 missions.

In an interview, Groom was asked what his least favorite part or battle was when researching for the book.  He said that it had to be the Bataan Death March.  It wasn’t so much the battle itself, but more about how the prisoners were treated.  The difference between how the Americans treated prisoners of war and how the Japanese did he found appalling.  He says that the allies were taught to take care of their prisoners whereas Japanese soldiers enjoyed the killing of the American POWs, The Daily Beast reports.

Speaking about Forrest Gump Groom says he and his publisher knew it was going to be a famous book and eventually a movie, but not even the actor Tom Hanks knew it was going to be as big as it was.  The success left everyone, including its author, in shock.  The thing that Groom still cannot believe is how quickly he wrote the book – in four months.  The movie is still a hit and has been released to select IMAX theaters; Groom is still getting money for the iconic book and movie.

He talks about some of his non-fiction works and how the best way to make them interesting is to make them educational.  No one will want to read a book based on true events if it is boring; what they want is something they can relate back to and discuss enthusiastically.