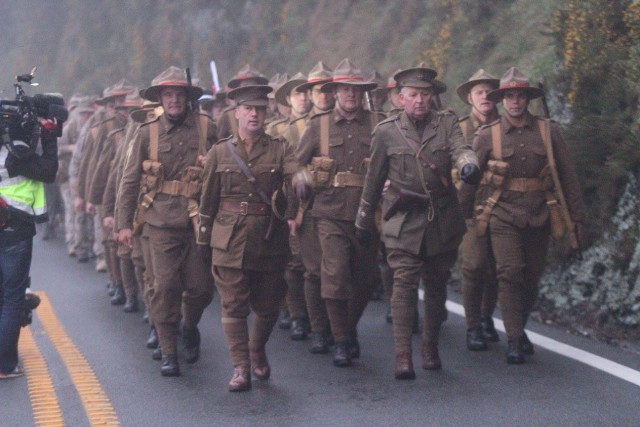 At the end of September, a group of enthusiasts in the Wairarapa region of New Zealand re-enacted the locally famous three-day Rimutaka Hill route march, across a range of hills and down to the coast. The group of re-enactors included descendents of the original World War One marchers.

The marches were undertaken by volunteers heading off to fight in France. The first one started on 23rd September 1915, with the departure of up to 2000 men. It took them three days and two nights to complete the march. It initially started from Tauherenikau, though later marches started from Featherston. The summit of Rimutaka Hill was reached on the first day. The nights were spent at Kaitoke and Upper Hutt.

Each march ended at Trentham army camp. From there, they embarked on ships in Wellington Harbour, and sailed for the Western Front. Over the next three years, up to 60,000 infantrymen followed the same route to the coast.

The march was partly used as a fitness test for men heading off to war. They carried full kit, including rifle, rations and water bottle. The march included a mock infantry charge.

The re-enactment commenced at 3 a.m., with a wreath-laying ceremony at the cenotaph in Featherston. Afterwards, the participants set off on the long climb to the Pass, at 555 metres above sea level.

One of the re-enactors, Jack Hayes, said that the marchers had spoken about their ancestors. He said he felt as though the ancestors’ spirits were accompanying them. Hayes said that his boots were terribly uncomfortable, even though he had tried to soften them beforehand.

Alan Stuart, another marcher, was wearing a helmet worn by his grandfather, Donald Stuart, of the Wellington Engineers, at the Battle of the Somme in 1916. He had been hit on the helmet by a bullet from the German side.

Some of the participants on Sunday, such as Michael Hughes, could not complete the march, but he said they were still proud to have taken part.

Once at the Pass, the marchers unveiled a memorial. They then continued to Upper Hutt, laying a wreath there, before finally making their way to Trentham, Stuff.co.nz reports.

The re-enactment was organised by Robert Bird. He said afterwards that he was satisfied with the attendance and pleased that people had had the opportunity to talk about their ancestors and reminisce about World War One.