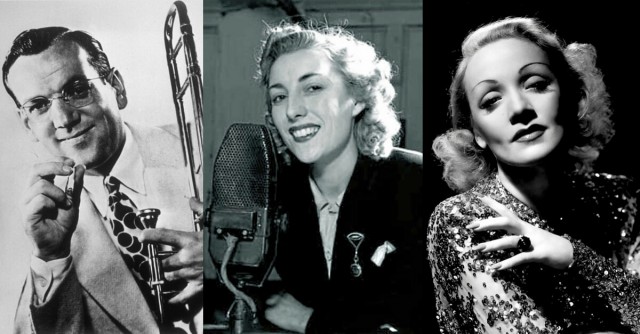 Since the days of the ram’s horn, music has been a part of war. During WWII, the Office of War Information urged musicians to create music to uplift the soldiers with patriotic songs, and at home, female musicians sang to the hearts of the ladies left stateside.

Those songs still stir patriotism in the Allied nations, and with yearning and hope pull our heart strings almost as much now as they did then.

This list does not encompass the whole body of music created during the war, but it does remember when.

Russia enlisted Shostakovich as a composer rather than as a soldier, knowing that he would better serve the Red Army by moving the troops through music. His symphony is a representation of the Nazi advance, the battles of the war, and ultimately, the Allied victories told in notes and crescendos. Recordings of it on microfilm made a harrowing top secret journey through enemy territories to make it to the United States where it was well received by American audiences.

Anyone who knows Morse code knows that dit dit dit dah is the code for V. Allied forces made great and rousing use of the opening of Beethoven’s Symphony No. 5, that starts with the famous Morse V. The BBC started the trend, and soon troops and civilians in war torn Europe were shouting V for Victory. Even train conductors across Europe blew the notes with their horns in support of the Allies.

Glen Miller was already a successful musician before the war began. He chose to serve his country by joining the armed forces and creating the Army Airforce Band to bring music and morale to his fellow soldiers. Through performances both live and broadcast, his band’s music became a soundtrack for the war.

American Patrol was actually written in the 19th century by Frank White Meacham and was meant to sound like an army approaching and then passing by. Miller put a swing spin on it to spiff it up for the modern soldier’s ear.

Of the Jitterbugging’ Variety:

Often dressed up as WAACS or WAVS, The Andrews Sisters wagged their fingers as they sang the songs that added light to the darkness of the war.

Originally written by Don Raye and Hughie Prince, this jump blues tune tells the story of a street musician as his talent wanes and waxes during his Army service.

GI Jive was also recorded by Louis Jordan, but Mercer is its author and original recorder, and his recording made it to the top of the Harlem Hit Parade.

Soldiers could certainly relate to this one, as it told the story of the day to day of the soldier’s life.

6. Don’t Sit Under the Apple Tree

Recorded by several artists, including Glen Miller, Don’t Sit Under the Apple Tree is most often remembered as humorously performed by The Andrews Sisters in the film Private Buckaroo.

This lady crooner can put a lump in your throat just thinking about her songs. She was known as “The Forces’ Sweetheart” and her career during the war was prolific throughout music, film, and volunteer service. She toured the globe singing for the troops, visiting hospitals, and otherwise bringing support to both civilian and soldier.

The theme of her songs usually centers on hope for victory and looking forward to reunion.

Now 98 and living in Britain as a real and true Dame, her music is still the most remembered of the era.

Marlene Dietrich is credited with being the star that contributed most to the war effort, excepting of course, those that enlisted. She sold more war bonds, did more stateside shows, and toured more on the front lines than any other Hollywood performer.

Lili Marlene was one of her most popular performances.

The song has a disputed past, but the British Ministry of Information attempts to tell it like it is with romance and intrigue in a 1944 film called The True Story of Lili Marlene.

Irving Berlin wrote this song as part of a revue he only intended to have a short four week run, with the purpose of fund raising for the war effort. The show, performed by real soldiers, was a huge success and circled the globe from Europe to Hawaii. In 1943 it was made into a film starring George Murphy and featuring Ronald Reagan.

Askey was an English entertainer and comedian that first jollied the troops in WWI. By the second Great War, he was a famous television and radio star for the BBC and was making comedic films.

In this song, Askey parodies the homesick soldier that in the end, wants his mommy.