The Mausoleum of the Martyrdom of Polish Villages is in its final phase of installation. The Polish village of Michniów in south-central Poland decided to host a mausoleum for those who were murdered during the German occupation from 1939 to 1945.

Thousands of innocent Polish citizens died during Nazi Occupation.  The mausoleum is to be located in this village because it was here where over 200 people lost their lives in a two-day attack.

The dedicated artist who won the competition to design the project in 2009 decided to give the mausoleum a historical feel to it.  His name is Miroslaw Nizio, and he also took part in designing the Museum of the History of Polish Jews in Warsaw.  He was the perfect candidate, having had experience working on historical pieces.

Nizio and his team decided to pierce small holes into sculptures; each hole representing a Polish citizen who was murdered during the Holocaust.  Nizio says that the final structures do not look appealing, but they have a meaning to them.  The sculptures look like huts in a traditional way and are covered with what looks to be deteriorating materials that are in danger of crumbling.  They were made that way in order to represent the burning villages that were destroyed.

The artist describes some of the secrets of how he and his team got the sculptures to look like they were burning down.  He says the cracks on the open and closed parts of the sculpture inspire the historical narrative as the sculpted buildings seem to undergo the deformation and destruction that the village went through. 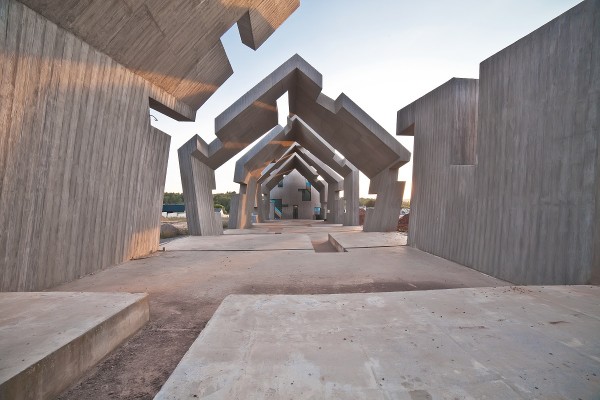 The first photo of the unfinished mausoleum shows both sides of the sculptures, looking almost like a tunnel. The ground surrounding it is bare and torn up from the construction; it gives off an eerie feeling of desolation and abandonment.  If a photo can make such an impression, imagine what the real historical site could do. 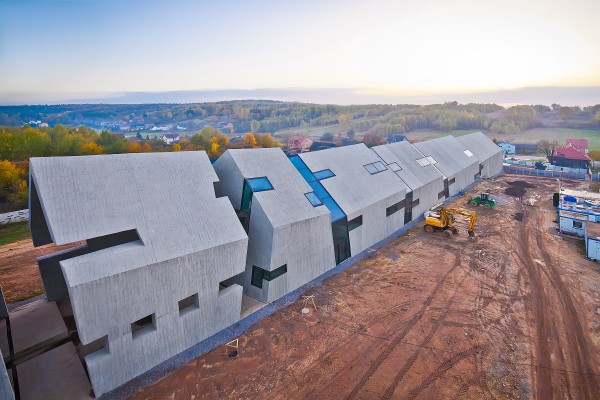 The second photo is of the inside of the mausoleum.  Although it is unfinished, it’s coming along well.  It will soon have windows allowing the sunlight to show through certain areas.  The shapes of the walls cast shadows in some places and bright sunlight in others. 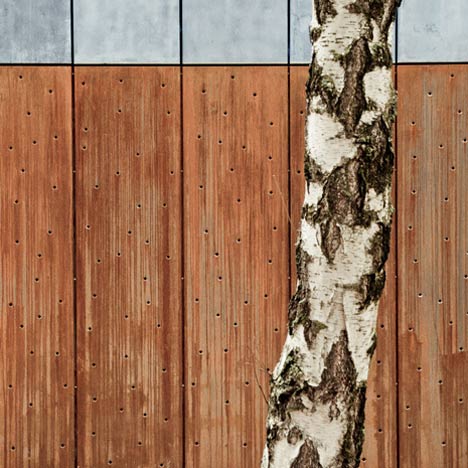 A third photo was taken after the roof was put on all of the walls.  There are still those small areas where sunlight can go through the windows in Nizio’s vision.

After Germany and the Soviet Union had signed a mutual non-aggression treaty, Germany went ahead to invade Poland; this marked the start of WWII. The first town the Germans took over was Wielun, killing nearly 1,200 people.  Five minutes after the attack on Wielun, a German battleship opened fire on a transit depot in Westerplatte, Danzig.

Just days after those two attacks, Britain and France declared war on Germany.  On September 17, the Soviet Union invaded Poland from the east.  After that, Poland had no other choice but to cease their fight and they surrendered their forces in October.

Even after surrendering, the loss of life was staggering – 65,000 troops and thousands of citizens died.  After Poland had surrendered, the Soviet Union invaded Finland and took on a months-long battle that would later be called the Winter War.  By 1940, Germany was already making plans for invading Denmark and Norway.