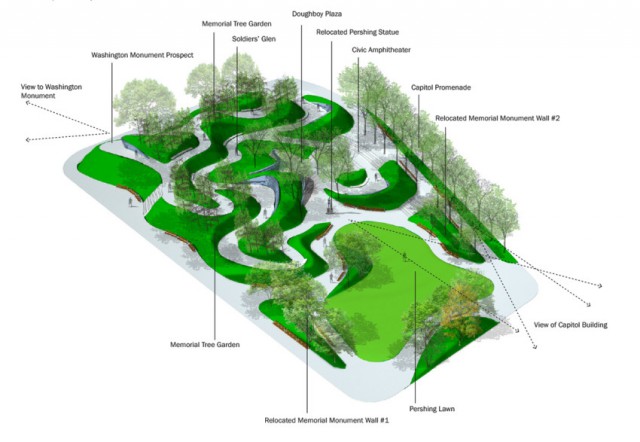 Pershing Park in Washington, D.C. is to receive a new World War One memorial.

The memorial to be placed has been opened up to the general public around the world to enter into a competition to design the new monument. Organised by the World War One Centennial Commission, 350 entries were received and have now been reduced down to just five finalists.

Pershing Park is in central Washington, D.C. along Pennsylvania Avenue and sits in-between 14th Street and 15th Street, not far from the White House.

The Commission said that getting the entries down to five finalists is just the beginning of what is going to be a long-term project.

The finalists now have to further refine and finalize their designs with more specific detail and will need to present their designs and plans to a group of organisations which will be involved in building the monument, including the National Park Service, US Commission of Fine Arts, and National Capital Planning Commission.

It is hoped that the final design will be chosen in early 2016. The five chosen as finalists are:

The area known as Pershing Park had a variety of buildings built on it over the years until the 1930s when the US Federal Government took ownership of the land and demolished everything standing on it.

It wasn’t until after World War Two that development plans for the area began, but disagreements about what monuments should be created prevented any works to take place until 1963, when the local authorities laid grass and began to cultivate flower beds, turning the area into a park.

By the 1970s, plans had begun to create a monument to John J. Pershing, who was the US General of the Armies during World War One. Work began to build the monument in 1979 and the Park was finally opened to the public in 1981, the District Source reports.

The statue of General Pershing was created by Robert White and has walls and benches surrounding it which describe the achievements of General Pershing during World War One. In the Park there is also a water fountain and large pond, which in the winter months is turned into an ice rink open to the public.