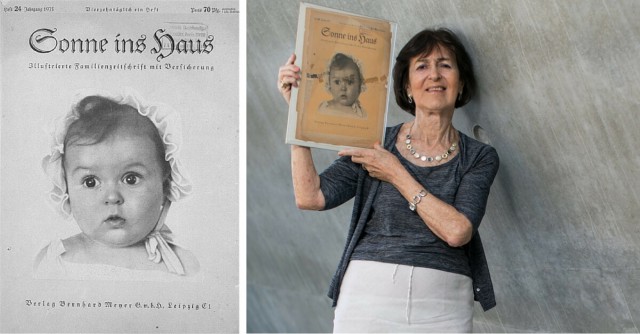 When Hitler took control over Germany, he was striving for Aryan perfection and wanted to get rid of the Jewish influence.  With that in mind, he had to use propaganda to make sure that he was selling the idea of the perfect person.

Right after Hitler took control over Germany, there was a photo contest for the perfect baby.  The contest winner graced the cover of a Nazi magazine, stating that this is the “perfect Aryan.” Little did the Nazi officials and the contestant judges know that the cover baby was, in fact, Jewish.  The little girl’s photo was first used on posters, but then soon was printed on postcards and even shown on store windows and doors.

The baby’s parents, Latvian Jews, came to Berlin seeking fame for their singing.  In 1934, the woman found out she was pregnant with the child whose likeness would be displayed everywhere.  The little girl, Hessy Levinsons Taft, now 80 years old, has told her family’s story only twice.  She has told it once at the Yad Vashem Holocaust Memorial in Israel, and orally at the United States Holocaust Museum in 1990.

Her parents, Jacob and Pauline Levinsons, came to Berlin in 1928.  Her father was a singer, and her mother studied at the Riga Conservatory in Latvia.  They moved to Berlin due to Jacob’s new job at an opera house.  He had taken a stage name, Yasha Lenssen.  However, once the opera workers found out that Jacob’s last name was Levinsons, they terminated his contract.

Hessy explained that her parents did not have much money and were living in a small, cramped apartment when she was born on May 17, 1934.  When she was six months old, that is when her parents took her to a photographer, seeing how beautiful she was.

The photo that was used on the magazine cover was originally framed and placed on Jacob’s piano.  While they thought that the photo was private and for their eyes only, that wouldn’t last long.  The Levinsons’ cleaning lady had come to tell them the news – she had seen Hessy’s baby photo on a magazine cover.  Pauline didn’t believe the cleaning lady and thought it could be any baby that looked like Hessy.  The cleaning lady wanted to prove Pauline wrong, so she went and bought the magazine, which was one of the few magazines that was allowed to circulate at the time since it was an official Nazi magazine.

Pauline was terrified to see her Jewish child on the cover of a Nazi magazine.  She called the photographer and asked him how that photo ended up on the cover.  The photographer then explained that he was asked to submit ten baby photos for a contest that he had taken.  So without thinking much of it, he sent in Hessy’s beautiful photo.

The photographer knew Hessy and the Levensons were Jewish, but he took part in this joke.  The joke was all the more satisfying when out of 100 entrants, Hessy was chosen as the example of Aryan perfection.

Hessy can say that now she sees the joke and can actually laugh about the irony.  However, if the secret had ever gotten out that Hessy was Jewish, she would have surely been killed.  The people who knew the Levensons found out about Hessy’s photo by going to stores and seeing her baby picture plastered everywhere.  However, those people kept that secret to ensure the safety of the Levinsons’ family.

The Levensons eventually fled Berlin and lived in Cuba for a few years before making their way to the United States in the 1940s.  Hessy and her mother settled in New York, but Jacob stayed in Havana to operate the family business.  It proved to be a challenge due to Fidel Castro’s rules.

But Hessy always heard her father say, “I have survived Hitler; I will survive Castro.”