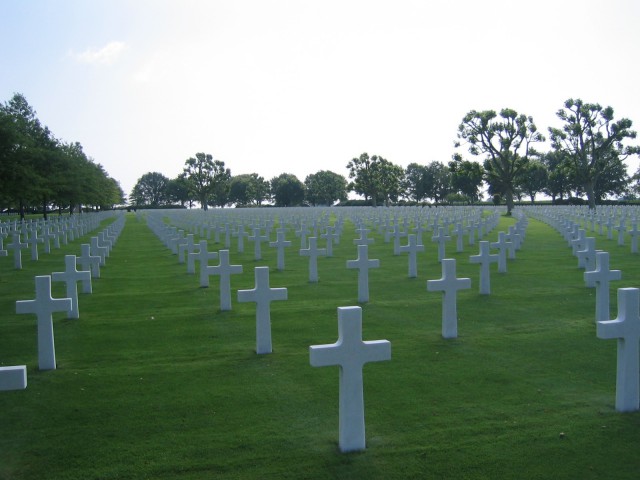 Teachers and students from Omaha Central High School in the US have made a one-off unique trip on the journey that former students of the high school took when they enlisted for military service during World War Two.

Captain Philip Horan and Private First Class John Cottingham were both graduates of Omaha Central High School in 1936 and 1943 respectively.  Both were killed in action in Europe and are buried at Margraten American cemetery in the Netherlands.

Scott Wilson Omaha Central’s history teacher organised the trip in honour of those previous students who joined the US Army and were killed in the war. Scott made the trip with 36 students and five teachers.

They wanted to show the students the journey that the American soldiers would have taken, first arriving in London and then landing on the Normandy D-Day landing beaches. They then made their way to Paris, Bastogne and finally ended the trip in Berlin. All in two weeks.

As part of the journey the group would also visit the military cemetery at Margraten in the Netherlands where Philip and John are buried.

During World War Two the Netherlands was invaded and occupied by the Nazis from 1940 until the end of the war in 1945.

More than 8000 American soldiers are buried at Margraten.

Many commemoration ceremonies are held at the cemetery and it is kept in immaculate condition, with mown lawns and row upon row of white military headstones. Since the war ended, local Dutch citizens have participated in a programme to ‘adopt’ war graves, this means that they contribute to the maintenance of the cemetery and every year or whenever they are able they can visit the cemetery and pay respects to their adopted American soldier who gave their life to free the Netherlands. The Foundation for Adopting Graves at Margraten cemetery is the organisation which manages and coordinates the adoptions, the Omaha.com reports.

The programme began since so many soldiers who were buried were unknown, nameless and there was little way of identifying them. The programme’s manager said that it enables the local people to give thanks and gratitude to the soldiers.

It is thought that over 100 graduates of Omaha Central High School were killed during the war.