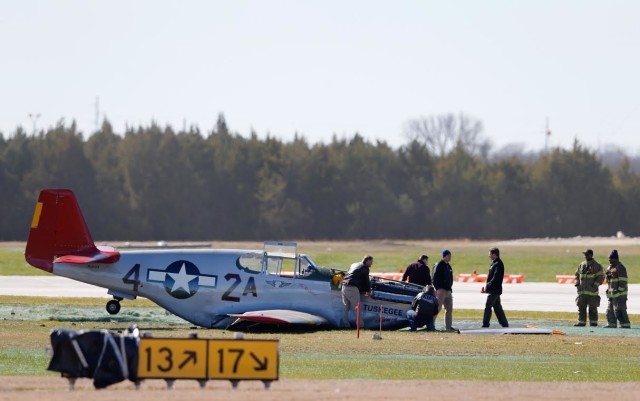 Bill Shepard, used all the formidable flying skills that he had to safely crash land a Mustang P51 WWII fighter plane on Wednesday 3rd February 2016.

He was coming in to land at Dallas Executive Airport when the landing gear did not descend, so he made a belly landing and skidded off the runway onto the grass verge where the propeller was torn off. Shepard, was piloting a P51 number N61429 owned by the Commemorative Air Force.

The plane’s name is Tuskegee Airmen, and Shepard had brought it to Dallas as part of the Black History Month.

The P51 is a single seat fighter that cruised at 362 mph, had a top speed of 505mph could fly at 41,600 feet and had a fuel range of 1,000 miles making her an excellent escort for bomber missions during WW II. She was fitted with a single Rolls-Royce Merlin V-1650-7 engine that was liquid-cooled and developed 1,490 HP. She carried four Colt-Browning M2 .50 inch machine guns with a maximum capacity of 1,000 rounds and had either 1,000lbs bombs or six high-velocity aerial rockets externally mounted.

This particular P51 was used as a trainer is the US in 1945 before it was declared war surplus at the end of the war. It was bought by a Montana college where it was part of a stationary display until it was donated to the Commemorative Air Force (CAF) in the late-1980s. 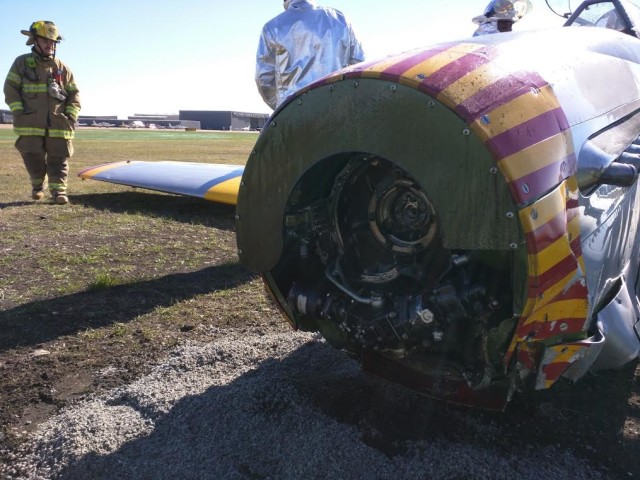 Shortly after it was donated the Minnesota Wing of the CAF raised $500,000 to fully restore the plane. The project was called the Red Tail Project and volunteers undertook much of the work saving a considerable amount by contributing their time and experience. The restoration was completed in 2001, and the plane with its distinctive red tail christened ‘Tuskegee Airmen’, took to the air for the first time since 1945.

The plane flew the air show circuit for three years raising awareness about the Tuskegee Airmen who flew during WW II but sadly in May 2004 it experienced an engine failure and the pilot, Don Hinz, died from injuries sustained in the crash after he had safely piloted the doomed plane away from spectators.

CAF Minnesota immediately began fundraising again to find the $1,000,000 needed to get the Tuskegee Airmen back into the air again. Once again volunteers gave of their time and knowledge to help and with the help of Tri-State Aviation, she danced into the air in July 2009.

This P51 is painted in distinctive colours to honour the memory of the Tuskegee Airmen of the 332nd Fighter Group. The red tail represents everyone that was connected in any way with the squadrons including pilots, navigators, mechanics, cooks, administrative staff, etc. Under the nose is the phrase ‘By Request’, this was the name of the plane flown by Squadron Leader Colonel Benjamin Davis, Jr.

Who were the Tuskegee Airmen? They were the first African-American servicemen that were selected to fly both fighters and bombers.   Most of them were college graduates or were still attending college and all of them faced down the racial segregation that had stopped them from being trained at the outbreak of the war.

They were subjected to the same entry qualifications and training as their white counterparts but due to the strict racial segregation in place at the time they were not permitted to fly on the same squadrons as their white counterparts. This strict racial segregation meant that in order for the squadrons to function African Americans had to be trained in all aspects of a fully functioning squadron, so they were trained in operations, meteorology, intelligence, medicine or engineering as any other suite of officers would be.

Then they had to train and deploy aircraft engineers, mechanics, armament specialists, riggers, radio technicians, parachute riggers, air traffic controllers and any other skills necessary to keep the squadron in the air and to fly against the enemy.

The airmen were trained at Tuskegee Army Air Field in Tuskegee, Alabama and the first intake was in July 1941 graduating in March 1942. Of the 13 that commenced training, five graduated with one of the successful graduates being a West Point graduate, Captain Benjamin O. Davis, Jr., who went on to become the Squadron Leader. The other four graduated as second Lieutenants and all were awarded the coveted Army Air Corps silver wings. Eventually, 992 African-American men were trained as pilots along with all the support and service personnel required for the squadrons.

The 99th Squadron was combat ready in April 1943, and they were deployed to North Africa where they joined the 33rd Fighter Group. Their first mission was to attack the island of Pantelleria to clear the surrounding sea lanes. With little or no guidance from their more experienced colleagues the 99th set off and for the first time in history an air attack caused the German and Italian troops on the ground to surrender gaining the 99th a Distinguished Unit Citation for their performance.

They were then moved to Sicily. With more graduates ready for combat, the all-black 332nd Fighter Group made up of the 100th, 301st and 302nd Squadrons was sent to Italy where they were joined by the 99th Squadron. From their base at Ramitelli on the ASdriatic Coast, the 332nd Fighter Group flew cover for the 15th Air Force on strategic bombing missions into Germany, Hungary, Poland, Austria and Czechoslovakia.

With the tails of their planes painted red, these brave and highly skilled pilots gained the moniker ‘Red-Tail Angels’ and they gained a very impressive service record.

The unit received a Presidential Unit Citation for taking part in the longest bomber escort mission of the war when they escorted bombers to Berlin on the 24th March 1945. During this mission, they shot down three German ME-262 jet fighters and damaged an additional five jet fighters without any losses on their side either to the bombers or to their own fighters.

In addition to this, one of the exceptional aerial gunnery feats of the war was undertaken by Lieutenant Gynne Pierson. In June 1944, two pilots flying P-47 Thunderbolts came across a destroyer in the Trieste harbour. Pierson only had his 50-calibre machine gun available, but that did not deter him and he strafed the destroyer causing it to blow up.

These airmen had to face down innumerable challenges firstly to get trained and then throughout their war service where strict segregation and outright racism reared its ugly head time and again. These men served with distinction and they earned a Silver Star, 96 Distinguished Flying Crosses, 14 Bronze Stars, 744 Air Medals and 8 Purple Hearts.