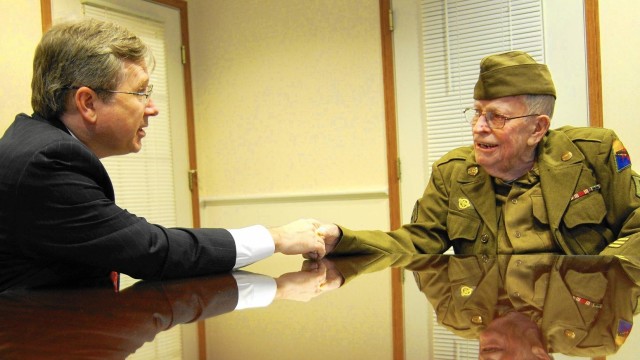 Robert Barcus, a decorated WWII veteran, realized after being discharged from service that he was due one more award. The army had failed to  award him his Silver Star for bravery, which he finally only  received last month, more than 70 years after the end of the war. Mark Kirk, U.S. senator, recognized the 96-year-old’s efforts at the Willow Falls Senior Living Community in Crest Hill, Illinois.

Barcus was overjoyed to receive the European, African, Middle East Campaign Medal with Silver Battle Star. Kirk described Barcus’s service with admiration, saying, “You saved civilization for us,” which drew tears to the old war veteran’s eyes; “You saved our butts from Hitler.”

Kirk, on a lighter note, teased Barcus about the reputation Army men have amongst the Navy (Kirk is a Navy veteran) as hating the water – jokingly of course. Barcus, however, assured Kirk that water was never a concern for him!

Barcus fought on Omaha Beach in France, during the D-Day Landings, after joining the army in 1943. Additionally, he participated in the Battle of the Bulge. While those battles were intense and took many of the tanker’s close friends, Barcus remembered that his strongest emotions came from his reunion with his wife. He declares nothing can compare to what that particular moment was like for him.

The medal given by Kirk adds to Barcus’s already impressive collection consisting of five additional awards, earned while serving in World War II. This medal held particular value, though, because it was obtained with the help of his family. Jody Woodley, Barcus’s granddaughter, commented that their research efforts coupled with the senator’s help made that day possible. Everyone felt the same joy in finally witnessing Barcus get the medal that he had been waiting for.

While this medal was earned through hard-fought battles, Kirk also acknowledged the veterans who never received the medals they deserved. To many people, this is arguably the greatest American generation, and yet they did not go looking for accolades or praise after serving in a war they felt was their patriotic duty. They are a modest group of soldiers. Additionally, many service records were destroyed in 1973 in a fire at the National Personnel Records Center in St. Louis.

But Kirk, as the chairman of the Senate Appropriations Subcommittee on Military Construction and Veterans Affairs, vowed to give veterans their hard-earned awards and proper recognition. He feels this is by far some of the best work he does under his job title.

After fighting his way through the war, Barcus chose to settle down in the Joliet area and work on the railroad for over 50 years. While she could not be there, Barcus’s wife Sylvia, who is ill, watched the ceremony by means of video conference from her hospital bed.